Fastest Cigar Rollers in the State of Missouri 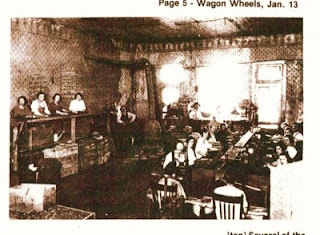 This item was taken from a 1917 issue of the Rich Hill Daily Review.

The demand for 8 cents El Nilos is such, that if the present force should work steady, they could barely fill orders now on hands, without selling another cigar between now and Jan. 1st next.

Scarcity of skilled labor has made it necessary for the workers to do their ut most to turn out the greatest number cigars possible, resulting in some of the fastest cigar makers in the State of Missouri. Mrs. Nona Fuqua Ashley, has the record for rolling a greater number of cigars, regular time between the hours of 7:30 a.m. to 6 p.m., of any cigar maker that ever worked in our shop during , our 33 years experience, and is an expert wrapper I cutter, and has learned her trade through begining at the bottom and working up, and account I of such has drawn in wages for 1 week as much I as $35.50, being the re cord of shop for above.

Posted by Bart McClaughry at 7:04 PM No comments: 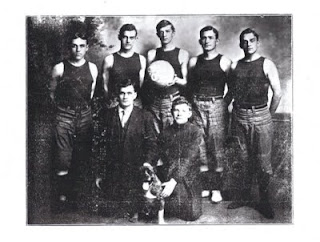 DURING THE school year of 1908-1909 there has been nothing that has attracted more attention and has been watched with greater interest than our Basket Ball team.
The schedule played this season was larger and stronger than that of any previous year. Although the team was not an ''ever-victorious" one, we have every reason to believe that it is the strongest team that ever represented our school.
The literary was so generous and so greatly interested in the team, that they furnished every member with a new suit.
A few days after the boys had arrived home the Town team of Rich Hill decided that they would show Rich Hill how to play basket ball, and also issued a challenge for a game. Of course the High School team accepted and when the story was told they had defeated the Town Team 34 to 15.
Their next trip was to Appleton city where they played the Academy boys and again suffered a defeat of 20 to 15.
The next game was the second annual game with our greatest rival,Butler. Although the score was very one-sided 20-4 the playing was evenly matched.
This was the greatest defeat Butler has ever experienced.
The next adventure was on Xmas day when our team defeated the Alumni 14 to 2.
Rich Hill showed her supremacy over the Hume team and easily won both games by the score of '29 to 12 and 30 to 9 respectively.
Line up 1909
Frank Wilson Mgr.- Forward
Joe Klumpp -Forward
Allen Wilson, Capt.- Center
Ivan Corbin,- Guard
Edwin Koontz - Guard
Cleo Craig- Substitute
Albert Crenshaw- Coach
Posted by Bart McClaughry at 10:21 PM No comments: 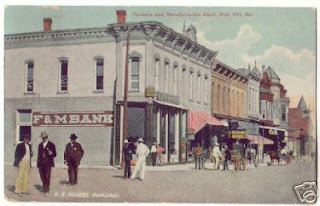 This story is from the 1955 memoirs of Rich Hill by Ed McQuitty
The Farmers and Manufacturers' Bank of Rich Hill commenced business late in 1882. J. C. Ferguson, of Fayette, Missouri, the principal stockholder, was president; J. C. Ferguson, vice-president; E. F. Sweeney, cashier and W. W. Ferguson and Robert T. Massie, assistant cashiers. A few years later W. W. Ferguson became president, John D. Moore, vice-president and John W. Jamison, cashier. Together with these officers, George Templeton and E. N. Hurst were also directors. It was while these gentlemen. were at the helm when, on a clear, winter's night in 1907, the bank was burglarized and blown up. Recovering from this misfortune the damage from the blast was repaired and the bank continued in business until the national crash came in 1930, when practically every bank in this section closed their doors. Mr. E. F. Sweeney, above mentioned, ultimately climbed to the presidency of the First National Bank in Kansas City.
Posted by Bart McClaughry at 8:39 PM No comments: