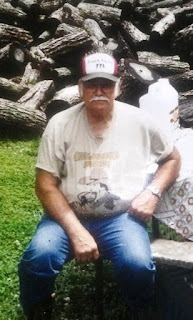 Donald Lee Steuck, 81, passed away June 25, 2015. Don was born June 4, 1934 in Rich Hill, MO, raised in Papinsville, son of the late Fritz and Katie (Doepel) Steuck. He married Kessie Joan Shelton in the state of Washington on July 13, 1957. Don was a veteran of the United States Navy. After the service, he drove a truck over the road. Later in life, he became City Marshal of Rich Hill for 13 years.
He is survived by 3 daughters: Renea (Jack) Westerhold, Metz, MO; Janie Tourtiliott, Nevada, MO; and Patricia (Tom) Pilcher, Rich Hill, MO.; 5 grandkids: Kessie Dawn (Justin) Heckadon, Jared Westerhold, Joshua (Kelsey) Westerhold, Tyler Gill, Kimberly Pilcher; 3 great granddaughters: Bailey, Brooke and Megan Heckadon; 1 great grandson, Marshall Westerhold; one sister, Elsie Klinksick, Papinsville, MO and one brother Junior (J.F.)(Dorthy) Steuck, Rich Hill, MO.
Don was preceded in death by his wife Kessie, 2 brothers, Robert and Walter Steuck, one sister, Lorene Kline.
Don participated in as many rodeos as he could. His favorite event was bull riding. He also enjoyed spending time with his family. He was a member of the American Legion. 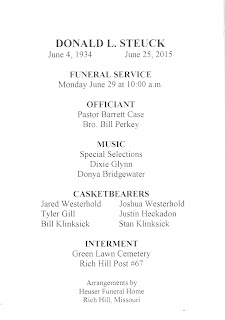 Posted by Bart McClaughry at 5:45 AM No comments:

This article is from Rich Hill Mining Review June 12, 2015
Thanks to Mining Review for letting me post the article and thanks to Bill Perkey for writing it. 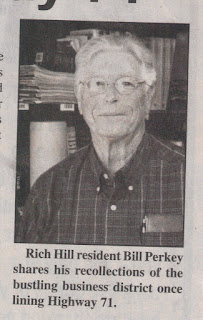 This week Bill Perkey takes us on a stroll down the memory lane of Old Highway 71 and the many businesses that once thrived there.
"I received so many positive comments about the previous article that I decided to write another," he says.
Perkey has many happy memories of Rich Hill and enjoys sharing them with others. "I must add a disclaimer, though. This was a long time ago. Several of these locations were separated by several years. My stories are just meant to be reminders of days gone by."
I have so many good memories Rich Hill when I was young that sharing them is a pleasure. With this writing I want to go back to when Old 71 Highway had many businesses.
Let's start at the south end. This was when it was two lane and busy all the time. On the west side of the highway was the 44 Club-a dance hall owned by the McKinley family. In its day, the 44 Club was quite a place. They sold beer and had live music and a large dance floor.
Saturday night was their big night and would often fill the building. It was usually full inside and a lot going on outside (like fights, etc.). At one time Mr. McKinley had a trap shoot out back which was well attended.
Across to the north was another smaller beer joint (dance hall) called the Boondocks. The Boondocks was run by Nile and Lottie Schofield.
Just north of this was. the Bedell's restaurant The Bedell's lived in half of the building, and the cafe area was in the other half. Then there was a small gas station run by the Maurice West family.
Next in-line was a small cafe. I believe the Goble family owned it. In the next block (which would be Park Avenue) was the Phillip 66 station. The station was a busy place and had two bays for repairs and several pumps outside. I think gas was about 18-cents per gallon.
Then there was the bus station. This was a favorite place where a friend and I would go and have a bowl of chili, a Double Cola, and put a quarter in the jukebox and get six songs to play.
Next was the new Dairy Drive Inn (which is now Swope's Drive In), I think it was built by Edwin' Fisher, Bill Christopher and Maynerd Miller. Across the street north was another Dairy Queen run by the Evans family, it opened some time later; but they originally started on the East side of 71 down south a couple of blocks then moved to this location.
Next was the Trammell Service Station. It was always a busy place, as they did a lot of tire repair including the big truck tires. Also this was where the boys, who had town routes for delivering the Kansas City Star, got their papers.
A driver would drop the papers off and the boys would have to roll and tie them with a string, then fill their bicycle baskets with the papers, and deliver them to those who subscribed.
I had one of these routes and I remember the day I quit. It was a cold winter day with ice on the streets and I turned my bike over and fell in the ditch full of water (end of story).
Then north of Trammell's was Kirby's Restaurant and across the street north was another restaurant, I think it was Telrows. Up the road was HoneyBee Johnson's bee farm and then the state high way maintenance office,  I might mention about  HoneyBee Johnson. He had a lot of bee hives and sold honey. He made his living doing this (as 71 It was a busy highway), he did a good business.
On his jars of honey was a picture of him with a bee hive beard. That's right, a swarm of bees is hanging off his chin. WOW!
Now, let's go across the highway to the east. Although it was not a business, the big red brick home of Ed and Jewell Link was the first building (we are now going back to the south on the east side of 71).
The next building was a liquor store. Across the 'road was the Starr station and cafe. This was a favorite place to eat. My mother worked there, as a waitress for a few years. I remember they had the jukebox that had the small boxes on the counter where you make your choice of music by pushing a set of numbers.
Next was the Sinclair Service Station. It also had 2 bays for service and repair. Across the street South was a small grocery store (I think it was run by Scott Bradley?)
That's the first place I tasted Grapette Soda. It was a grape flavored soda drink in a small glass bottle. You put a nickel in the slot of the pop machine and pull out your drink. (This later became a cafe owned by Dot Harp and others).
To the south of this was the Skelly Gas Station owned by Ben Ellis. In the next block was the George Ellis Auto Repair. He and his wife lived at the same place. This is where the businesses stopped which is just about where we started but on the opposite side of the highway. As you can imagine as time went by, things begin to change and so did the businesses.
As this is just from memory and includes several different years, I may have left some things out or added some that are not quite right, forgive me. But this is as I remember. Good reading to you and by the way, why not share some of your memories?