This Blog article comes from 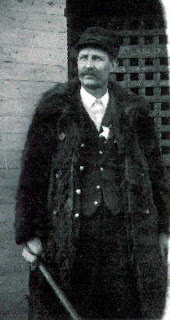 Posted by Bart McClaughry at 3:44 AM No comments: 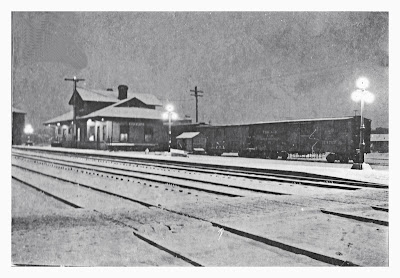 Posted by Bart McClaughry at 7:00 PM No comments:

Brakeman Killed. Aug 28 1890
'Feely' McQuity  Meets Sudden Death at His Post of Duty.
Knocked into the River.
The Sad and Untimely Death of a Rich Hill Brakeman this Morning at 11 o'clock-The Remains brought to Rich Hill at 1 o'clock.
This morning 'Feeley'  McQUITTY passed north on the local, due here at 7:30 o'clock, but which was about 8 hours behind time, and was seen at the depot by a number of his friends and former companions for the last time alive. The particulars of the sad death of this young man are about as follows. When nearing the intersection of the Emporia road, about five miles this side of Butler, the instructions were given Mr. McQuitty to set the brakes, as some switching was to be done. The conductor was on top of the train, and when the instructions were being given Mr. McQuitty was on the ladder in the act of ascending, and leaning out was watching the conductor, Mr. Garnett, unawares of approaching the Miami bridge. While in this position one of the abutments of the bridge struck the unfortunate brakeman on the back of the head, hurling him 15 feet into the waters below. The signal was given and the train stopped as soon as possible, but the unfortunate man was a corpse before he could be reached. A great hole, the size of an ordinary ink stand, was found to have been made in the left back part of the head, which evidently caused instant death. An inquest was held at Butler, and a verdict returned in accordance with the above facts.
The parents of Mr. McQuitty have been residents of Rich Hill the past 9 years, and the sudden death of their son is indeed a severe shock to them. The deceased has made Rich Hill his home much of the time, and was well known and liked by all. Besides his parents, he leaves a young wife [Margaret Hannah Pearson, later Linthicum] and six brothers to mourn his sudden demise. The wife of the deceased was not apprised of the sad fate of her husband at our hour of writing, as she was visiting at the mines, and could not be reached. Mr. McQuitty had only been married about a year, and the young wife, as well as all other members of the household, have the profound sympathy of the Review in this dark hour of their sorrow.
The funeral services will be conducted at the family residence in the East End to-morrow evening, to which all friends of the deceased and of the family are invited.
Related article:
Roadmaster Meyers in Town.
Roadmaster Meyers was in the city yesterday, and went out to the Mia- bridge, where Mr. F. U. McQuitty was killed on Thursday of last week. While there Mr. Meyers took occasion to measure the distance from the timber where Mr. McQuitty met his fate to where he landed in the water below, and found the same to be 90 feet. "It is a very great distance for a human body to be knocked by the force of a blow, and the imprints on the abutments where his head struck would indicate that they had been struck with a huge piece of iron of some kind.
--of about fifteen brakemen who have engaged in that avocation from Rich Hill, Mr. McQuitty is the third to have met death while on duty.
Posted by Bart McClaughry at 6:45 AM No comments: