Among the early settlers was a man by the name of O. Spencer, a well educated man from Kentucky and a Methodist minister, who had a love of fine horses. He settled on a farm near Rich Hill, where he divided his time between farming and preaching. Later he became engaged in the coal business and began breeding fine race horses. Many of his horses won recognition on the great tracks of the country. He was instrumental in establishing a race track in Rich Hill which became one of the best known tracks in the country.
Mr. Spencer was a good friend of Major G. I. Lynch, who resided in Butler but owned and operated a deep pit mine in Rich Hill. His operation was known as the Bates Coal Company. There was a track running into the mine and the coal was hauled out in coal cars by a small donkey. Mr. Lynch, from Boston, was also a lover of fine horses so the two had much in common. The race track became part of the large fair ground on the east edge of the city.
So that the cultural aspect of the city would not be neglected, a library association was organized and incorporated August 12, 1882. W. T. Tygard was elected President; S. Cain, Secretary; and S. G. Morrison, Librarian. They started with one hundred books. In 1974 the library is still in operation with books and __________________________________ an adequate supply to meet the towns needs but they proved to be disappointing, so he built an artificial gas plant that made enough to light the city. A double row of gas lights with large white globes decorated Park Avenue from the entrance gate on the east park to Park Place on the west. It was a beautiful sight when lit at night and was heralded far and wide as the “Great White Way”. Later, electricity was brought in and the town was a blaze of light!
Ad to those already listed a cigar factory, an ice and refrigeration plant, two wholesale beer houses and a daily newspaper, The Rich Hill Gazzette, which was started August 5, 1880, by George P. Huckeby. It was republican and was started with the promise that a postmaster job would be granted him to assure a living.
Of course, the picture couldn’t be all this rosy. Many of the miners brought in were of foreign descent and great beer drinkers. There were man from Belgium, Austria, Italy, Wales and Ireland. At one time there were seven saloons doing a thriving business. The miners worked hard, drank hard and played a bit rough! It was a wide awake, rootin’ tootin’ western town in the evenings when the miners were in between shifts. On Saturday nights, which was pay day, there was usually a fight or two, with possibly a knifing and occasionally a shooting so a jail house became a necessity. It is still standing, and in use, when necessary. It looks as though it could do a good job of corralling the boistrous and unruly.
It looked so stout and dungeon-like that we asked to view the interior. So several of us ladies were given a personal tour by the present police officer, Lester Fenton. We found it to be swept clean, in fore ways that one. It was scrupulously clean, painted white and very bare! There were four cells with iron gates. One cell contained a stove, another was the toilet room, and two were reserved for prisoners. Each contained a bare bed made of bars and a folded blanket on each. The bull-run, or large room you enter was for any females who might be brought there, and contained two bunks spread with blankets. The small openings called windows, seen in the picture, were hidden by a lowered ceiling, so one could not see the sky, and the walls were of stone, hewed at least eighteen inches to two feet thick. About the only thing any one could do in such confinement would be to repent of ones wicked ways and vow never to get caught again! 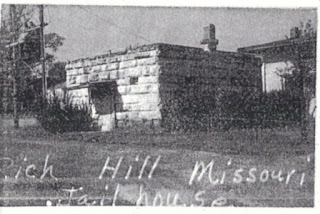 Posted by Bart McClaughry at 5:00 AM No comments:

When school opened, first year Rich Hill Football Coach John Denny must have been more concerned about fielding a team than how many games they’d win. You see, at the time Denny only had 12 able-bodied players competing for 11 positions. Forget the platooning, we don’t play 6-man football in the state. The situation improved. About a Nineteen “newcomers” joined the team over Labor Day weekend. 12 players “stuck”. “We worked real hard on conditioning”, Denny Said. “Some of them left us.”
When the Tigers traveled to Adrian Sept. 7, only the “original 12” were eligible to play. “I fully expected us to get clobbered,” Denny admitted, “But somewhere along the line the kids didn’t expect it.” Rich Hill lost 13-0. Adrian finished the season at 7-2.The Tigers practiced Saturdays and Sundays to get in the allotted number of sessions so the rest of the players would be eligible to play the second game. They fell to Windsor 7-6 in game two.
Then Midway came to town. The Vikings, of course, are defending Class 1-A state titlists. Midway won 13-0, but it was only 6-0 until the closing seconds of play.“Midway didn’t play very well,” Deny acknowledged, “I think (Midway Coach Laural) Hobick’s a tremendous coach. It’s an honor to be on the same field with him.” The Midway loss was a costly one. Doug Isaacson, the Tigers’ talented running back, broke a bone in his shoulder, but Phil Kesterson stepped in for Isaacson and picked up over 800 rushing yards in 6 ½ ball games.
The freshman really came through,” Denny said. Freshman quarterback Tom Sutcliffe and classmate Brain Tabor teamed for the winning score in the 34-28 victory over Osceola- Rich Hill’s first. The same duo accounted for the go-ahead score in their 20-6 victory over Miami.
Denny said of 180-pound senior linebacker-fullback Roger Rigdon, “He was more than just a key for us. I can’t say enough about him. We wanted to give him the ball more but he was just so good at blocking.” Denny called 175-pound junior slotback-running back Bill (Bubba) Sutcliffe the second best athlete on the team. He expects big things from him next year. Chuck Duffield, a 220-pounder and Ray Audula, a 195-pounder were the Tigers top live men but Denny was proudest of Bart McClaughry – a 6’1”, 130-pounder who was called upon to play offensive tackle. He’d never played football before, but he worked real hard. He did it on all guts alone.”
I think we have super kids here,” Denny said. “The kids deserve all the credit. Maybe he was being a bit modest. The former Lillis High School mentor should be commended for motivating his youngsters to “give their all. Following a 44-0 victory over winless Kansas City West Friday, the Tigers finished the year at 4-6. Included among their victories was a 12-7 triumph over the Archie Whirlwinds- contestants in the Class 1-A state play-offs.
Posted by Bart McClaughry at 3:30 AM No comments: