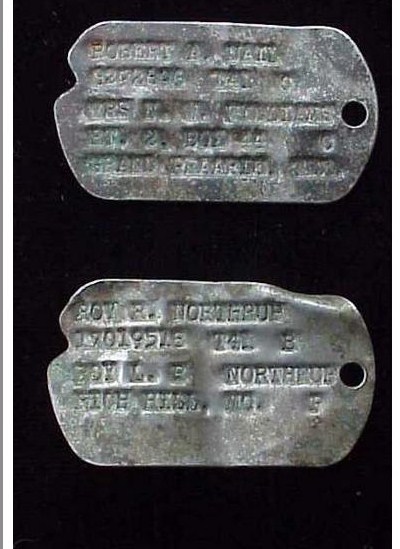 
Some of the most intriguing items on the group are the dogtags that were on an old piece of wire when I got the group. Two of the dogtags are from men of the 60th CA , who died on the Japanese Hellship Arisan Maru ( Robert Nail and Roy Northrup ) in 1944 . The circular dogtag is made out of a coin and has a " T-42 " date on the back. It belonged to EM3c Emmett Lee Kilmer of the USS Canopus who was liberated in Manchuria at the end of the War . The final tag belonged to Major Reginald H Ridgely of the 4th Marines on Corregidor . He also survived the war and attained General rank in the USMC . I do not know how Chaplain Borneman came into possession of the tags. They all have a great deal of wear , corrosion, and some are bent. They were all on an old wire when I got them in his effects.
Posted by Bart McClaughry at 7:15 PM No comments: