City Carrier Herb McDaniel and the Faithful dog Tippie,Who has gone with the carrier for 10 years,never missing a day,regardless of the weather. 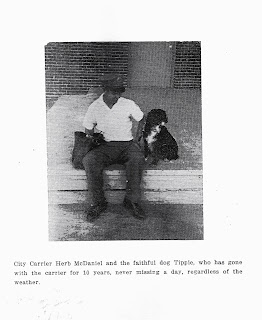 Posted by Bart McClaughry at 4:26 PM No comments: 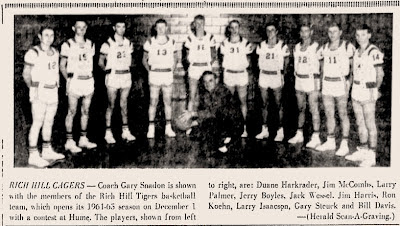 http://news.google.com/newspapers?nid=M3zsPnPgUlUC&dat=19641127&printsec=frontpage&hl=en
Posted by Bart McClaughry at 2:44 PM No comments:

Thanks to Tom Perry for the use of this paper 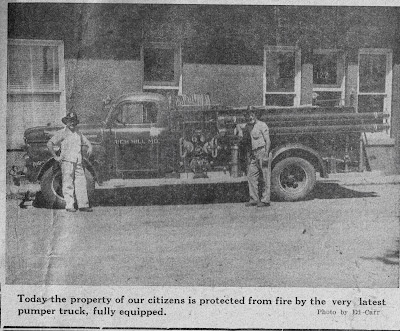 Posted by Bart McClaughry at 4:43 PM No comments:

Melvin Nathan Kithcart
Melvin Nathan Kithcart, 88, owner/operator of Kithcart Orchards was born Nov. 16,1923, in Rich Hill, to Nathan Melvin Kithcart and Ruby Grace Briscoe Kithcart.
After graduating from Rich Hill Bryant High School in 1941, Melvin joined the Army. He saw the Battle of the Bulge and was within 400 yards when the Americans first crossed the Rhine. He also fought in the Battle of Hurtgen Forest. After the fighting stopped in Europe, Melvin was a guard at the Nuremberg War Trials. He personally, guarded Herman Goering, leader of the Nazi Luftwaffe.
On his 23rd birthday in 1946, Melvin married Mary Lou Sherman from Butler. Their first business was an Army/Navy Surplus store which later became a men's work clothing store.
Melvin began the next and most enduring work venture of his life by planting fruit trees on his parent's property in 1951. In 1968, U.S. - 71 became four lanes and took most of the orchard. After moving the house and buildings, a new 600 tree orchard was planted. Before the new trees produced, Melvin began driving a school bus. He also tried his hand in many other jobs to make ends meet. This lasted 20 years.
In 1970, Melvin and Mary moved to the farm and began selling fruit. As the years passed, the business was expanded to include nuts, candies, yard ornaments, souvenirs and anything else Mary could find at the "getting place". Son Jim and grandson Richard joined the business in 1996. Melvin enjoyed working with his family, never . missed an opportunity to share a smile or give a word of hard-gained knowledge.
Melvin passed away Thursday, Jan. 26, 2012, at Willow Lane, Butler, in his last days Melvin was cared for by the staffs of Heart­land Hospice and Heartland of Willow Lane. He was preceded in death by son, Jim, in 2006.
He is survived by his wife of 65 years Mary; daughters Sharon Tourtillott and husband Leonard, Rich Hill, Donna Zeller and hus­band Gregg, Springfield and daughter-in-law Carol Kithcart, Raytown; grandchildren, Jeff and Misty Tourtillott, Jimmy and Lindsey Kithcart, Richard Kithcart, Luke and Kiley Tourtillott all of Rich Hill, Nicholas Zeller, Elizabeth Zeller, Springfield, Kim and Curtis Wilkie, Kansas City andTonia and Brantley Highers, Raytown; great-grandchildren Morgan, Ashlyn and Nate Kithcart, Andrew Kithcart, Stachia and Jenavieve Tourtillott, Conner and Kyle Wilkie and Mischka and Brantley Highers and a host of friends from around the country.
Funeral services were held Jan. 30, at Heuser Funeral Home with interment and Military rites at Greenlawn Cemetery by American Legion Post #67. Donations to Heartland Hospice may be made through Heuser Funeral Home.
Posted by Bart McClaughry at 5:25 PM 1 comment:

Shelter House in the East Park

This is a picture of the Shelter House in the East Park when it was new.This picture comes from the special anniversary Edition of the Rich Hill Mining Review July 29 1955-Thanks to Tom Perry for the use of the Paper 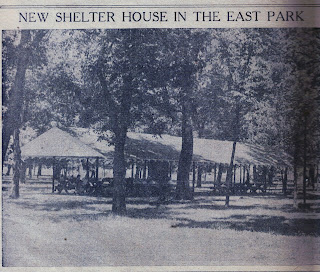 Posted by Bart McClaughry at 6:55 PM No comments:

Conclusion of the Depression years

Driskill Dry Goods advertised prints at lOc, 15c  and 18c a yard. Beasley Clothing had men's work shoes for $1.69 and sport shirts for 49c.
Oleo Margarine was white (looked like Lard) and had a little capsule or envelope of coloring in the box.The oleo had to be softened, then colored because the law did not allow colored oleomargarine to be sold.This oleo sold for 15c a pound but would have been too much competition for the dairy industry if colored.
Small cans of vegetables sold for 5c a can, bread 5c a loaf and oxydol 10c a box.
Milk was delivered to the door each morning by the Maplewood dairy. Glass bottles were delivered in the oint and quart sizes. Clean empty bottles were put on the porch and picked up when the delivery was made. Milk could be paid for by the month or money could be placed in the empty bottles and paid for on delivery.
There was no minimum wage and organized labor was not very strong.
Economic conditions were made worse by extreme drought for several summers. This reduced the farmers yielda great deal. seeds were not drought resistant and much of the experimentation of the 1930's produced hybrid corn.
If the farmer participated in government programs by planting a limited number of acres, the government would by his grain. This eliminated the possibility of a surplus on the farmers hands. He could by the grain back if the market price went higher than the government had paid him.
This period marks the beginning of government aid to the needy. this help came in the form of jobs, food clothing, and aid to dependent children. The Social security Act of 1935 gave people a feeling of securityfor the years when they were no longer wage earners.
The event of World War II brought about the end of the depression years as the war created a demand for more jobs, more workers, and more money came into circulation. Every economist knows that the solution to one economic problem merely creates another.  The war economy started and inflationary movement, and over a period of year, we once again have a high rate of unemployment. 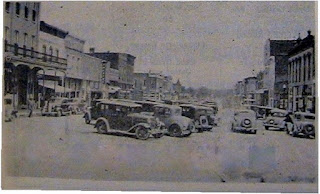 We do not ever want another depression and in general many people feel that we are better off with today's inflation and other economic problems than we were during the 1930'
Posted by Bart McClaughry at 5:54 PM No comments:

Government employees also felt the depression.They took a 10% cut in pay temporarily. It was restored after three years.
For recreation the Booth Theater had family night on Friday. If the family went as a unit, they would be
admitted to the show for 10c each. By 1940 the  regular admission (not family night) was 11c and 26c
federal and state tax included.On summer evenings young people and married people put on their bathing suits at home and went to  the Rock Quarry for a swim. Some people went to the  Drainage Ditch but the water was better at the Rock Quarry and it was in walking distance for many.
The Band concerts in the park on Thursday night attracted many people.This was a town band made up of a number of local musicians. To name only a few there was Marion Hall ,Martian Johnson, Emil Johnson Earl Week,Fred Marquardt,Ward Moore , Curtis Burris,Sam Klumpp,Byron Myerley, Gerald Myerley, Dr. Bill Allen, Raymond Peterman, Glenn Droz, Harold Douglas, Doris Van Gordon and Dolores Klumpp The merchants collected the money to pay them $1.00 if they came to both practice on Wednesday night and band concert on Thursday night. Some being very versatile could play several instruments People who walked, sat in the park on the benches and those who rode parked their cars around the sat in them. The drug stores remained open until after the concert- so anyone could get a 5c ice cream cone.
The American Legion had card parties during the winter months and many people enjoyed an evening of bridge or pinochle.The parties were sponsored by various businesses that furnished the refreshments and prizes.
People-came to town on Saturday night and parked their cars in the center of the street, sometimes they got out and walked around the street and visited with their friends, or at other times they sat in their cars  and visited with people they saw. The stores remained  open until 9:00 p.m. in winter and 10:00 p.m in summer. Just before closing time, perishables  such as strawberries and peaches could be purchased at really low prices.

Posted by Bart McClaughry at 7:13 PM No comments: