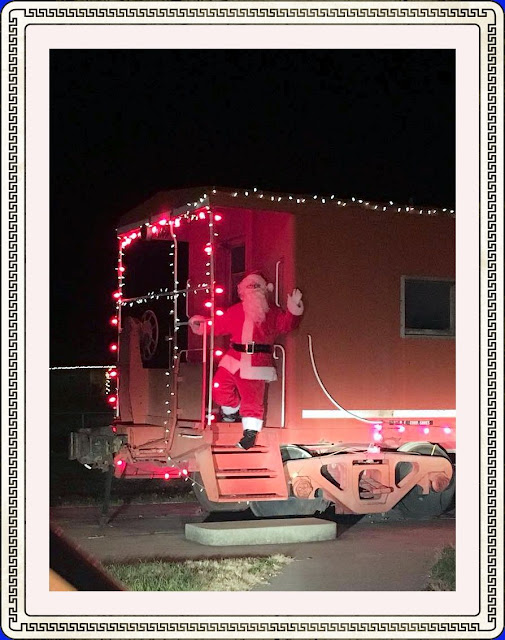 Posted by Bart McClaughry at 4:48 AM No comments:

Rich Hill Mining Review April 18 1991  Story on Junior Manchester
Mr. and Mrs. Junior Manchester
The list of stores where Junior and the late Bessie Mae Manchester worked before opening their own grocery store sounds like a 1940's Rich Hill business directory.
For the 33 years between 1954-1987 you could almost always find one or both at the Manchester Grocery ,even well into the evening.
Junior stated his working career at Dunnaway's  back in 1934.He also worked at Marquardt's Grocery,Ashley's Grocery and McCormicks Grocery.During many of those same years Bessie Mae Wheeler was working at Sharp's Grocery, Whittie's Bakery and Canfield Variety.
The couple married in 1950 either lived on their cattle farm east of Rich Hill or at the store throughout their married life.
Junior's father was a carpenter in Rich Hill and Junior attended all 12 years of  schooling in Rich Hill.Bessie Mae's parents were farmers in Sprague area and she went to grade school in Sprague and high school in Rich Hill.Bessie was a long time member of the Christian Church. 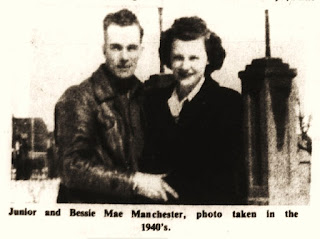 Posted by Bart McClaughry at 2:11 AM No comments: 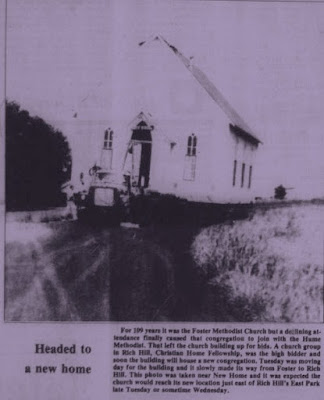 Headed to new home
For 109 years it was the Foster Methodist Church but a declining attendance finally caused  that congregation to join with the hume Methodist.  This left the Church up for bids. A Church group in Rich Hill Christian home fellowship ,was the high bidder and soon the building will house a new congregation. Tuesday was  moving day for the building and slowly made its way from Foster to Rich Hill.This photo was taken near New Home and it was expected the Church would reach its new location just East of Rich Hills East Park late Tuesday or sometime Wednesday.
Posted by Bart McClaughry at 9:08 PM No comments: