Feb.8 1990
By Randy Bell
A police car headed west on Rich Hill's Walnut Street with the fire engine not far behind. It was shortly before noon on Friday.
Foggy, damp, cold, a little drizzle, a miserable day to fight a fire. That thought crossed my mind as I climbed into my car, camera in hand.
But this day there would be no fire. No smoke to breath, no soot to stain face and clothes, no long lines of hoses to roll back up. Granted many firemen and ex-firemen were close at hand but this time they would not be grabbing for helmets, boots and yellow overcoats, they were dressed in suits and ties.
This day they had come to honor the passing of longtime Rich Hill Fire Chief Corey Gordon. It was a fitting final salute to this veteran of 38 years of fire fighting that the fire truck led his funeral procession, that fellow firemen were his casket bearers.
All my life I had watched Corey Gordon leading the Fourth of July parades and bringing Santa Claus to town in the fire truck. But it wasn't until I came back to work at the Review that I really became acquainted with Corey.
As memory serves, Corey was at one of the first city council meetings I attended as a reporter back in 1972. By then Corey had already served 30 years on the volunteer fire department. He was asking, that night, that the council start putting aside some funds for the purchase of a new fire truck. After the meeting he mentioned to me that a new fire truck wasn't a necessity right then, but that sooner or later it would be and the cost would be higher.
Over the next eight years our paths, Corey's and mine, would often cross. As smoke billowed from some upstairs window Corey would direct his firemen and I'd snap pictures. Later we'd get together and he'd give me details for the story.
But there was much more to the story than the story. The fires made headlines, but the untold hours made the fire department. Hours of training, of taking care of equipment, paperwork, inspections, of fire prevention efforts — those hours were seldom glorious or exciting and seldom made the news. But your home, your very life was a little safer for each of them.
Next to his family, fire protection for our town was the most important factor in Corey's life. In fact that devotion often took Corey away from his family, sometimes in the dead of night, sometimes in the heat, sometimes in the cold, sometimes during a holiday dinner. Fires are never convenient.
But year after year Corey was there. When it came to durable devotion he set an example for the rest of us.
And Corey, if you happen to be listening, that new fire truck will be arriving in town in the next couple of weeks. When I snap a picture of it, I'll be thinking of you. 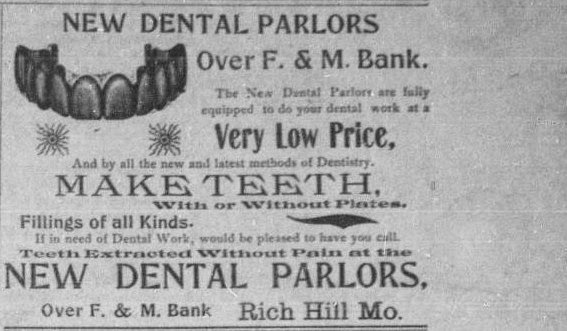 The Rich Hill Tribune began publication in 1890 as a weekly four-page paper, appearing each Thursday and covering news from Rich Hill and Bates County, Missouri . The publishers and editors were J. Claud Oldham and Robert E. Pritchard. Ownership of the paper changed in 1900 to George F. Huckeby and Perezza A. Pritchard, and the name changed to the Tribune.
Pritchard left the paper in December of 1902, and Nannie R. Huckeby joined the editorial staff. The December 18, 1902 issue states: "For her long and faithful work in the mechanical part of the office, my associate Nannie R. Huckeby joins us in the business management of the paper, and any favors shown her, will receive our entire and unqualified endorsement."
On January 1, 1903, the paper's name changed back to the Rich Hill Tribune, expanding to eight pages with George P. and Nannie R. Huckeby as publishers and editors.
The Rich Hill Tribune began its sixteenth volume with the September 7, 1905 issue in which the paper advertised a contest to increase readership and to collect past due notices: "We are now for the first time making an effort to extend and increase our circulation and shall be glad to have our friends help us by paying subscriptions to any one of the twenty-five young ladies who are soliciting subscriptions in our voting contest, thereby helping them to win a valuable prize while they favor us with their subscriptions. If you owe back subscriptions, hand it to them and thus give them so many votes toward getting at least one of the prizes offered. If your subscription is paid up, one dollar will extend your subscription one year and help the young lady in her effort and you will get the worth of your money in the paper."
The details and rules of the contest took up most of page 4 of the newspaper with the heading "NOW ON-The Tribune's Big and Popular Piano Contest": first prize offered to the winner would be "a fine first class Straube Piano-valued at $400." The contest ended with the announcement of the winner: "Miss Julia Dubach Gets The Handsome Piano." The contest was a huge success, and the Tribunewas "satisfied with the result. What we expected was subscribers and we got them; and a large number of back subscriptions collected at no greater rate than it would have cost us through an adjustment agency. The Tribune is not going out of business as a result of the contest either, but has just ordered a supply of new paper."
On June 6, 1907, after George P. Huckeby was appointed postmaster at Rich Hill, Claude A. Brown joined the Tribune as manager and editor and was there until September of that year. Although Huckeby tried to continue running the paper, on January 2, 1908, he issued his "Retiring Statement," explaining that the “management of the Tribune changes with this issue. Finding it impossible to do justice to the paper and give the attention demanded by the post office department to the duties of the post master, we have turned the Tribune over to Mr. George B. Dowell, a young man brought up in a printing office, and well qualified both by education and practical knowledge of the business to make the paper a success. The general policy of the paper will not be changed, politically, morally, or socially....Mr. Dowell is the son of the popular mayor of Adrian, editor of the Adrian Journal and comes to us highly spoken of by all who know him, thus leaving the paper in the hands of just such a successor as we have been looking for. We retire from the management of the Tribune with no animosities, and with good wishes for all. Huckeby and Huckeby.”
On June 24, 1909, Albert Matteson and Luther Fry assumed management of the paper. Both men had been with the Tribuneduring the eighteen months it was published by Dowell.
The Rich Hill Tribune ceased publication in early 1911.
Provided by: State Historical Society of Missouri; Columbia, MO
Posted by Bart McClaughry at 2:00 PM No comments:

Mary S. Northrup 96,of Rich Hill.Missouri, died on Thursday, August 30, 1984 at Medicalodge Nursing Home, Butler, Missouri where she had been a patient for the last 12 years.
Mary was born on September 29, 1887 at Tooele, Utah, the daughter of John Gillespie and Elizabeth Whitelock, Stewart.
On September 29,1910 Mary was united in marriage to Roy L. Northup and to this union two sons were born, one son, Roy Richard was killed October 24, 1944 while serving his county in the Army in World War II.
Mary had lived in Rich Hill, Missouri for 40 years. She owned and managed the Northrup Drug Store for many years until her retirement in 1964. She was very active in the V.F.D. and the America Legion and other civic affairs.
She was a member of the Presbyterian Church.
Besides her son, she was preceded in death by her husband, Roy who passed away in 1944 two brothers and two sisters.
Mary is survived by a son, Jack Northrup of Lee's Summit, Missouri, two Grandchildren and two Great Grandchildren, nieces and nephews.
Funeral services were held Saturday September 1, 1984 at 2:00 p.m. from the Underwood-Steinbeck Chapel, Rich Hill, Missouri with Charles Rhodes officiating, Interment was made in Green Lawn Cemetery, Rich Hill, Missouri.
Mrs. Pauline Underwood organist played selections of "Ave Maria" and "The Old Rugged Cross"' Those serving as casket bears were: Herb McDaniel, Paul Droz, Jim Wheatley, Harry Poulter, Fred Marquardt and Harland Swope.
Services and interment were under the direction of  Underwood-Steinbeck Funeral Home, Rich Hill Missouri.

Posted by Bart McClaughry at 11:11 AM No comments:

Posted by Bart McClaughry at 5:05 PM No comments: 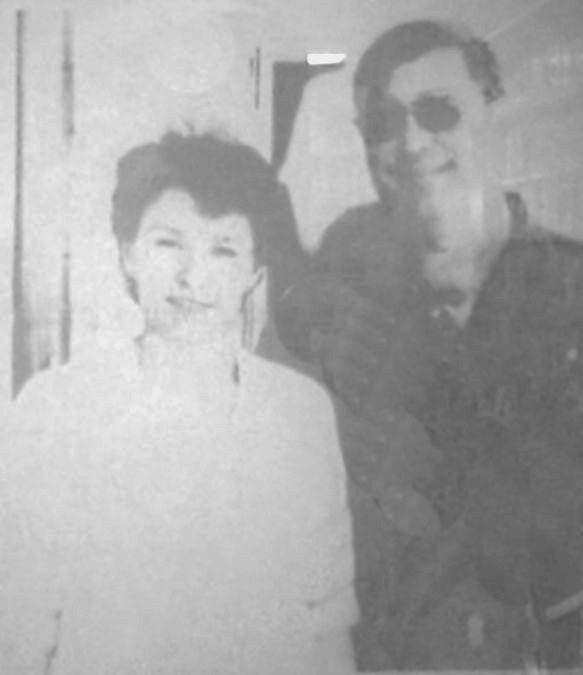 On September 24 MeElroy Feed and Grain became Hoeper Feed and Grain with Terry and Dixie Hoeper the new owners.
Both Terry and Dixie are familiar faces to the Rich Hill area.Terry is a 1968 graduate of Nevada High School but lived on the family farm west of Rich Hill for the last 11 years. During those years he has been engaged in grain brokerage and farming.
Terry and Dixie were married 9 years ago.Dixie is a 1971 graduate of Rich Hill and grew up in the Sprague area, the daughter of Mr. Marvin Kenney.
Both will be working in the business. Terry as truck dispatcher and manger and Dixie as bookkeeper.
The couple purchased the Elevator because we needed the room to better handle the products we deal in white corn and oats,we needed the facility to work from,"said Terry
Expansion plans are already underway and scheduled to be done by June 15 including the addition of another elevator leg that will allow them to move 4000 bushels of grain move per hour.Also more storge 70,000 bushels more, for white corn is planned.
"We want to get farmers to book acres,instead of bushels, of white corn on contracts with Quaker Oats"said Hoeper.
Hoeper Feed and grain also offer a line of livestock feeds and supplements along with barbed and hog wire and steel fence posts.
Hoeper Feed and Grain is located on old 71 highway south.

Posted by Bart McClaughry at 7:42 PM No comments: