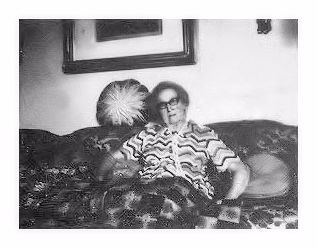 Mrs. Mary Northrup, displays a lap robe she has made for the Veterans Hospital. Mrs. Northrup has several people make these robes. She turns in over 300 robes each year to the Hospital.

Mrs. Mary Northrup will celebrate her 85th birthday Friday, September 29, over 50 years of this time has been spent here in Rich Hill. In this 50 years Mrs. Northrup has been active in many civic affairs.
Mrs. Northrup was born in Los Angles California.She received her degree in pharmacy at the University of Southern California. She worked a short while in Kansas while her husband finished his degree, also in pharmacy. Then the couple moved to Rich Hill to open a drug store. Her husband Roy, after about 15 years became ill and then, bed-fast. For the next several years Mrs. Northrup ran the business herself. Altogether the couple was in business 31 years.  They had two sons.  Jack Northrup ran the drugstore in rich Hill for awhile and is now in Odessa, Mo. The other son Richard, was killed in the Philippines during the war.
After Richard was killed, the government sent word to Mrs. Northrup that her son had been killed and buried either at sea or in the Philippines. The urge to know where her son was laid to rest sent Mrs. Northrup on many travels. She finally found that he was, indeed buried in the Philippines and not at sea. Richard had been taken prisoner. The Japanese shot him along with many other prisoners shortly before the the war ended.
Mrs. Northrup has traveled to almost all parts of the world. In South America she was turned back due to conflicts in the country.  The French Montmartre made her an honorary citizen of that town and sent her a large painting. In Rome she had a private audience with Pope Pious the 12th.
In Rich Hill, Mrs. Northrup was head of the Community  Banquet for many years and arranged for many noteworthy speakers at these functions. In memory of her son she gave the score board at the High School. She proudly showed the invitations she gets each year for the graduation exercises. This past fourth of July she presented the town with a flag for the West Park also in memory of her son. She headed the Veterans of Foreign Wars Auxiliary for 11 years. She had the VFW Hall built and later sold it to the Veterans.
Now, at 85 Mrs. Northrup keeps busy with a project also connected with Veterans.  She has lap robes made each year for the Veterans Hospital. She receives as 980 pounds of rags from various companies. She then provides the backings and as many as 50 people in Rich Hill make the robes. When she accumulates about 65 she takes them to the hospital. Once she took 650 robes to the men. On the average, however,   she takes about 300 robes a year.
Mrs. Northrup says she knows everybody in Rich Hill and knows there can be no better place or people to spend 85 years with. On her birthday, Friday we at the review, wish her many more.

Posted by Bart McClaughry at 7:58 AM No comments: 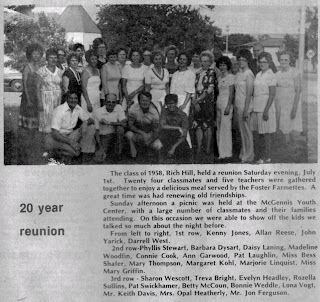 Thank you so much for your blog! Attached are recent pictures of the 1926 Firetruck. I would like to give  Rich Hill citizens another opportunity to purchase this piece of history as it will not be available after 927/2019. I am very willing to take less than the $10,000 appraisal in its current condition as my family would like it to go back to Rich Hill verses another buyer. 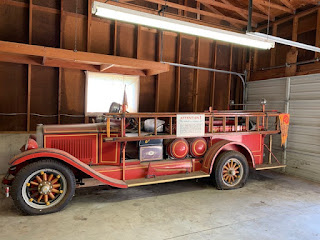 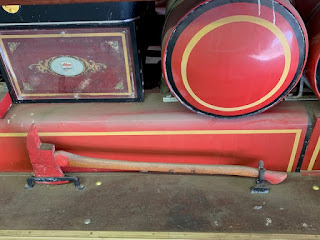 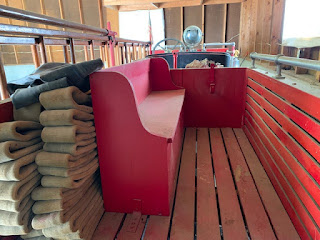 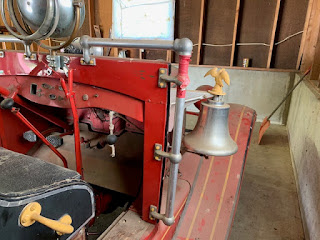 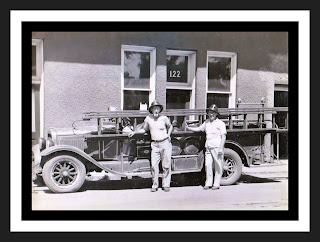 The Back of the Picture says Cory Gordon and Lee Gordon

Posted by Bart McClaughry at 6:52 PM No comments: 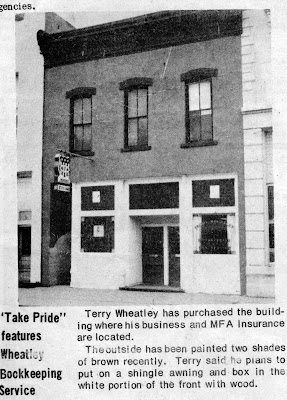 Terry Wheatley has purchased the building where his business and MFA Insurance are located. The outside has been painted two shades of brown recently.Terry said he plans to put on a shingle awning and box in the white portion of the front with wood.
Posted by Bart McClaughry at 8:47 AM No comments: 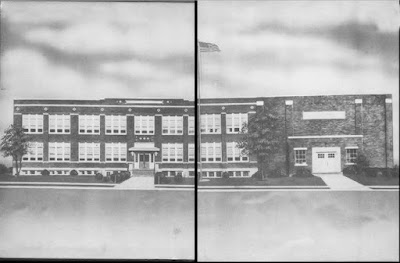 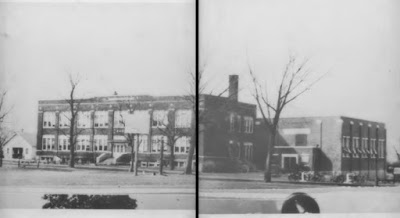 Posted by Bart McClaughry at 5:38 PM No comments:

Another picture of the 1926 Fire Truck

The Back of the Picture says Cory Gordon and Lee Gordon 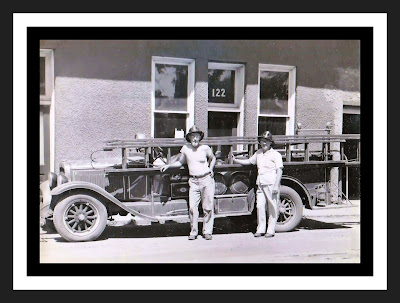 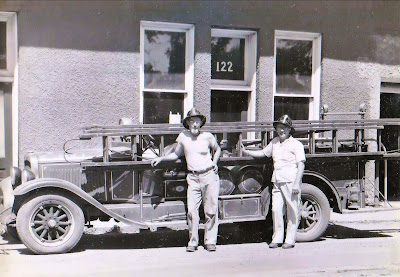 Posted by Bart McClaughry at 7:55 PM No comments:

From Robert Woodall Facebook
These series of pictures are of Rich Hill Mo new fire truck tey purchased new in 1926. It is coming up for sale the first weekend in August in Independence Mo.
https://www.facebook.com/robert.woodall.144/posts/10215292610656741
Sign says;This is a Fargo Truck with a Chrysler Motor. It was Purchased new by the City of Rich Hill Mo.in 1926 from the Boyer Truck Co. of Logansport Indiana and served as the City's only Fire Truck until 1951   When Acquired by its present owner the actual mileage was 1200 miles 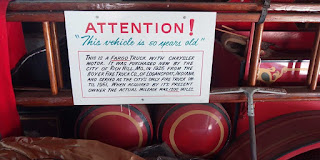 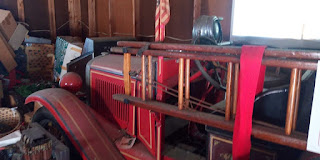 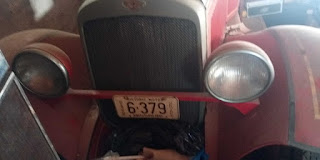 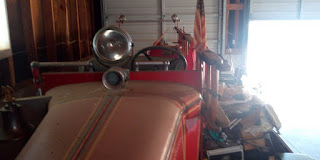 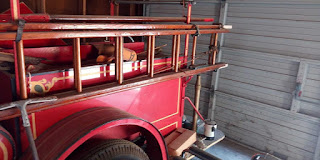 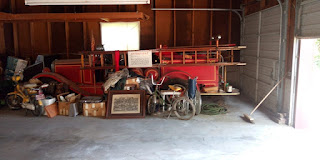 Posted by Bart McClaughry at 10:41 PM No comments: 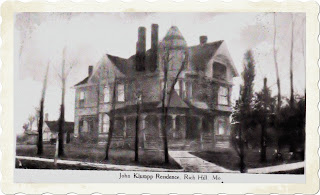 Kay said that she found this Postcard in her great Aunts box of her things that she had saved. Upon speaking with Dixie Glynn the house pictured above was where their house now stands. The original Klumpp house burnt down around 1910. When they built the house that the Glynn's currently live in, they tried to build the new house as close as they could in resemblance to the original Klumpp  house.
Posted by Bart McClaughry at 4:23 AM 1 comment: 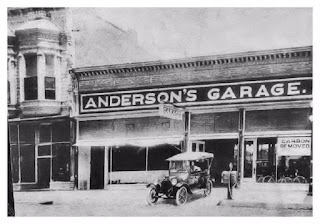 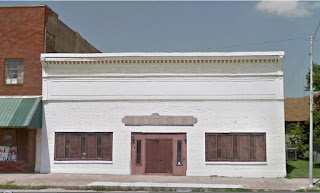 Posted by Bart McClaughry at 2:41 PM No comments:

Rich Hill was founded on the discovery of a great  coal field in southern Bates County. For a number of years this county ranked number 1 in the production of coal within the state.The Digging of the Coal was hazardous occupation and hardly a went went by but what some sort of mining accident was reported over the Rich Hill field,from a service injury to death, so we list a few of the accidents of record . August 2, 1891, a Negro boy 14 years of age was killed by a fall of slate in Gulf mine no. 5 October 7, 1890.Thomas Colburtu and Rufus Whitten lost their lives by a blast at Pacific shaft No.2.In the 1881-1890 period each miner did their own shooting down of the coal.The noon hour was the usual time until the regular shot firers began doing the same work at night. Usually two miners constituted a team of shot firers.The Blast was lighted about the noon hour and the two miners started for high ground when the smoke became so dense that they lost their way and headed back to their room when the second shot went off. Mr. Whiten died shortly after being taken out of the mine and Mr. Colburt lived until late in the day, dying at his home on West Maple street.

A waterspout "hit"Rich Hill directly after midnight,July 20th, 1892.The accepted rainfall in 3 hours was 6 inches. It caught the two shots fires,Charles Miller and Carl Bowers in Hines Brothers slope behind a wall of water.The entombed miners were in the mine for  36 hours before being rescued. They found a dry room they had a light all the while and spread their midnight lunch out so that they were not starved. The Hines Brothers slope was sold to Martin & Gee about 1893, who operated it for a number of years, and was located on the Spencer land just south of the Brick and Tile Plant was located. At lest 500 men and boys worked around the clock with buckets in order to lower  the water enough so they could be reached by the rescue parties. On the afternoon of the 21st with men being crowed around the air shaft, an "Old Time" coal miner from the Sprague coal field, George Bowman, jumped down the air shaft, 25 feet to 5 feet of water. He had told the crowd,"I an not afraid to go down and get them"He was overpowered by other miners,brought  back and taken to town and put in jail until he sobered up. When the rescue party reached the men there was a great of joy from the people on top, including DR. W.H. Allen, who "stood by."  He had a quart of whiskey and several wool blankets. After giving them " a stiff drink."he wrapped in the blankets and they where taken home.

Hill coal fields of when the Pacific mine No. 15 located a mile and a half south of Town, began operation.For 15 years this was the greatest coal producer in the State employing at its peak 550 miners and the records still stands of producing 72 Cars of coals in 8 hour period taken from a shaft.To answer this question we have before us a record showing as follows : { The contact for the new switch from the Missouri Pacific railroad to the new fields of the Rich Hill Coal Mining Company,south of town has been let to, Meers, Hopkins and Harrison.They started work on the switch November  14,1890.The switch will be a little short of 2 miles in length. It leaves the main line about a quarter mile south of the Pacific depot and runs southwest across the lands of W.K. Royce and Robert Massie to the new shaft.}


Posted by Bart McClaughry at 8:47 PM No comments:

{Rich Hill Mining Review Aug 11, 2017}
If you were to ask a much younger Bart McClaughry if he enjoyed public speaking, chances are the answer would have been a resounding."No!"

As a student in Greg Brock's Science class, McClaughry was in strong disagreement with his teacher's explanation when requiring students to give presentations to the class. "Someday you may have to get up in front of a group and speak." McClaughry says,

"At first I didn't agree with him and I didn't like it one bit. Then I developed a strong fondness for speaking to groups and I have had it ever since."

Local historian and blogger McClaughry will be speaking at the 120th Reunion of the Bates County Old Settlers Society on Wednesday, Aug 23 at 1:00 P.M. where he will discuss pre and post-Civil War Bates County and how the railroad helped the area prosper. He has recently discussed area  history at the 2017 Rich Hill Alumni Banquet and gave a brief presentation during the Fourth of July celebration.

McClaughry finds the stories of Rich Hill fascinating and says the history of the town is often stranger than fiction."In my years working for the City of Rich Hill." I have often wondered when working on different projects, how things got this way? You can still look at Rich Hill's City Hall building on the east side and see a faint image where the door used to be,which they used to take the horses and the fire pump in and out of the building.

"You can look at the old power plant building on Maple Street and on the west side,"he continues,"and still see the doors where they used to shovel the coal in to run the steam powered generators. Another example is when you read about the baseball field, you find how excited everyone was to have an actual ball field built so they would no longer have to play ball in a cow pasture."

McClaughry keeps an online record of area history through his blog, "Rich Hill Missouri History." There he shares interesting articles and photos from old newspapers clippings and books. He says,"It is very rewarding to have people contact me and state how much they appreciate the blog, the interesting stories and historical information posted on it."

McClaughry invites interested readers to share his passion at the 120th Reunion of the Bates County Old Settlers Society on Wednesday, August 23, at 1:00 PM. in the old Butler gym, which is air-conditioned.

Posted by Bart McClaughry at 8:57 AM No comments: