I wrote a book about one of the oldest high school football games in the country - the Turkey Day Game.  (I also wrote the Border War Game book between KU and MU).  The reason that I'm contacting you is that I found your blog about Rich Hill.  I am researching something that applies to Rich Hill and perhaps you or someone can help...

An early Webster Groves, MO (a St. Louis suburb) resident, Mark Moody, graduated from St. Louis High School (because Webster Groves, at that time, did not have a four-year high school.  He entered college at Princeton University and graduated in 1899.  His first job was as the principal of Rich Hill High School.  Here's what is interesting...

Moody returned to Webster Groves (the earliest known date is 1902).  At Webster High School he became principal of what was finally a four-year institution.  He, despite being principal of the school, played left guard on the football team.  The school, by 1903, had adopted the colours of orange and black because of his attachment to Princeton University.

While checking your blog, I found that Rich Hill's mascot is a tiger and that the yearbook from 1909 is orange and black.  The owner of the yearbook is reading it this weekend to determine if the school colours might have originally been orange and black.  If so, it is very likely that those colours were selected because of Mark Moody.  It would also make sense that the school colours might have later changed because they were considered ugly.  (A similar attempt was made at Webster in the late 1910s and early 1920s - however, the school determined to keep orange and black.)

It is my hypothesis that indeed the early colours of Rich Hill High School were orange and black, that in the 1930s they adopted the tigers as a mascot because of those colours (mascots were adopted during the 1930s) and that some time afterwards, the colours were changed to red and blue.

If you know anything of this history, would you please let me know?

Shawn Buchanan Greene
Posted by Bart McClaughry at 11:36 AM No comments:


HECKADON FAMILY
You are cordially invited to the 100th Heckadon family reunion, a celebration of 155 years in the United States. Thanks to Ancestry.com and FACEBOOK, descendents of Philip and Margaret Heckadon have the opportuntity to join together and share our common heritage.

Philip Heckadon was born in 1835, the son of Ontario Mennonites.  Although his parents were born in PA and traveled with other Brethren groups on the "Trail of the Black Walnut" to Ontario, their identities are unknown. Margaret McDowell was born in Stranraer, Scotland in 1842, immigrating to Canada with her parents. In 1859, Philip Heckadon and Margaret McDowell were married in Kansas. Philip enlisted in the Kansas 12th Infantry Regiment (Union-Company C), serving in the American Civil War. The Old Settlers' History of Bates County, Missiouri (1897) indicates that Philip Heckadon settled in Bates County in 1867. 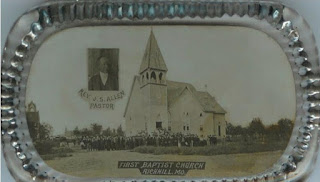 Posted by Bart McClaughry at 7:43 PM No comments: