The 4th of July have always been held on the fourth of July or on a Monday,if the Fourth fell on a Sunday with one exception.
In 1955 it was decided by business people and residents of Rich Hill to have a belated celebration commemorating the birthday of the nation and combine it with the seventy fifth  birthday of  the city. A three day celebration July 29,30,and 31,was planned and what a celebration it was.
The first day,Friday,July 29 was Agricultural day awards were presented at the High School and in the afternoon a parade of people dressed in 1880 costumes and old machinery was held downtown.
In the amateur contest Jeffrey O'neil vocalist won first Second place winner was Willow Branch club and third Foster Busy Bee Club.
Miss Sharon Colwell,daughter of Mr. Tom Colwell won the Queen contest Sponsored by the American Legion and its Auxiliary.
Saturday, July 30 was the big day.In the afternoon a parade of seventy-five entries was held in the afternoon. The first christian church won first Community Garden club second and the V.F.W. Auxiliary third.
The last day Sunday, July 31 was another big day.Union church services were held  in the west Park in the Morning.A basket dinner was held in the East Park and in the afternoon.the new shelter house in the East Park sponsored by the Women's Civic club was dedicated followed by the presentation of play ground equipment for the park.It was presented by a representative of the American Legion Auxiliary, sponsors of the project to the City of Rich Hill.
News commentator of radio and TV Mr. Randall Jesse made the major address of the afternoon.
It is estimated that 30,000 people attend the 3-day event.They came from surrounding towns all over Missouri and Kansas, also Oklahoma,Arizona,Tennessee,Florida,Iowa, Illinois Nebraska and Washington, D.C.

Posted by Bart McClaughry at 5:12 AM No comments:

This Story is from Ed  McQuitty's  Memoirs
The Battle of Manila was reproduced in Pomp and splendor on the night of July 4, 1898.Commodore Dewey with a complete replica  of his fleet of battleships.,cruisers and vessels was reproduced in sparkling realism. All sort of fireworks were to used to bring out the desired effect in sea warfare.This demonstration required many hours of labor and the expenditure of a large sum of money. But it was worth all its cost. The Battle was so prefect the writers for Kansas City and St.Louis  papers commended it very highly. 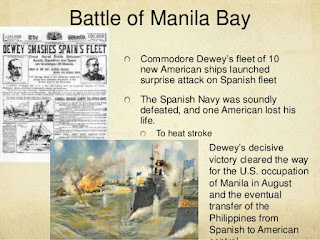 Posted by Bart McClaughry at 8:53 PM No comments: