This Blog comes from the Rich Hill Mining Review on Feb, 2010 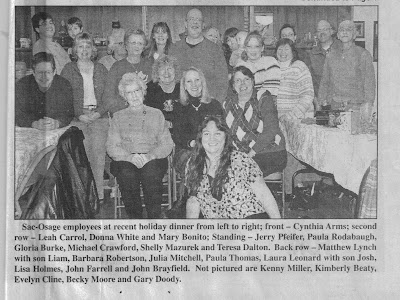 With the ushering in of 2010, the Rich Hill Mining Review has entered its 130th year of publica­tion, with the promise of a healthy future in the years to come. That is because it is owned by Sac-Osage Publishing, a regional company that is positioned to weather the financial times and trends that are plaguing many small town publications. With four weekly newspapers and three buyer's guides, Sac-Osage is able to be more cost effective in its operation and more advertising friendly to its business customer.
The Mining Review was once the premiere newspaper in booming Rich Hill during its coal mining years. Then during the many decades that followed, it contin­ued in operation even though Rich Hill moved from being a city of promise to becoming one of many small towns struggling to I make ends meet.
Randy and Ellen Bell purchased the paper in 1980 during a time when small town papers still could turn a profit, but it didn't take long for the Bell's to realize that despite how many hours they put in the publications, it wouldn't provide enough,in­come for a couple and growing family,
"I remember reading in a trade journal one year about the dismal forecast that was predicted for small town newspapers with populations less than 1,500," said Bell who also added that despite a 500% increase in advertising rates while he owned the paper, printing costs increased by 1,000% during the same period.
But as Bell put it, "giving up the paper wasn't easy. It's kind of like someone quitting ciga­rettes. They may know its bad for them, and they may have lots of reasons to quit, but it's not that easy." For a number of years, the Bells augmented the decline in from the paper through the-money generated from their book-publishing company. But in 2000,-it was time and they sold the paper to Sac-Osage.
Posted by Bart McClaughry at 4:42 PM No comments:

This Picture is from the 1928 Plat Book 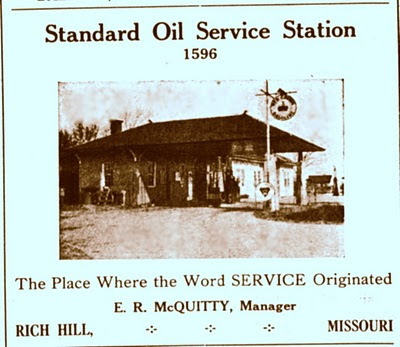 Posted by Bart McClaughry at 8:11 PM No comments:

Another story from Ed McQuitty -First printed in(1955) 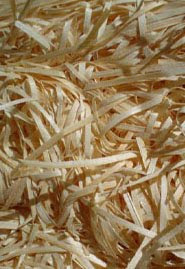 An excelsior factory was an early institution in Rich Hill. Located where the People Elevator now stands, many car loads of the product were shipped from Rich Hill annually. This plant also provided considerable employment, not only at the factory, but the woodsmen who cut and hauled in the willow, cottonwood, maple and other soft woods for processing.

Posted by Bart McClaughry at 8:00 PM No comments: