It has warmed up enough for me to get into the barn loft. Attached is the 1910 Rich Hill Graduating Exercises Program. It was sent to Misses Cora and Maude Hoover. N Edith Hoover their sister was in the graduating class as was my Grandmother Laura Heck. 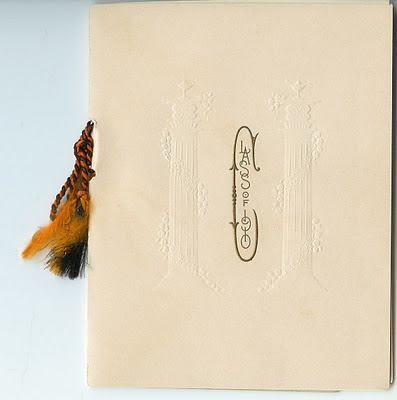 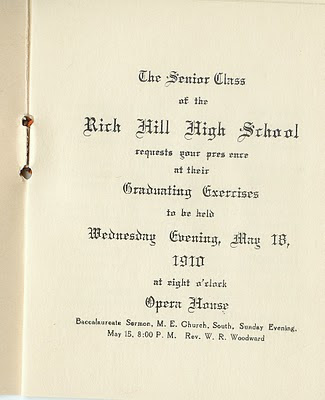 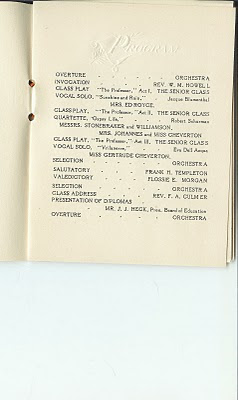 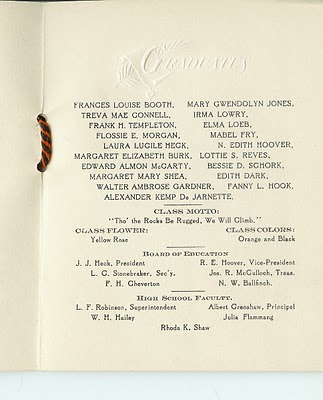 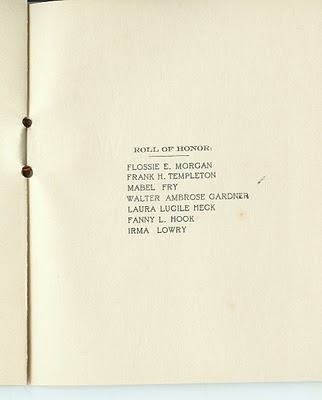 Posted by Bart McClaughry at 5:08 PM No comments: 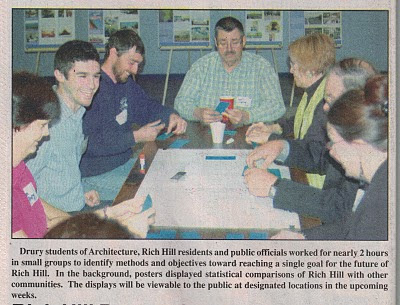 About 30 residents participated in the Public vision meeting held at the Rich Hill High School auditorium ,Tuesday evening on Feb.22.They included city officials,school board members,leaders in the community and concerned citizens.
Prior to the meeting,those examined large displays which depicted Rich Hill past and potential future.There were economic graphs,demographic studies and comparisons made with other communities.
The meeting opened with Vision Committee Chairman,Bart McClaughry,welcoming representatives from Drury University and those in attendance. Then Professor Jay Garrott greeted guests and introduced the students involved in the project.
According to Garrott ,the Drury students had the opportunity to select the community they wanted and this semester,his top five students all selected Rich Hill.
Workshops were then formed with residents teaming up with Drury students to determine a primary goal for the city,complete with objectives and suggested methods to achieve their aim .Groups were furnished with goals,objective and method cards.
Each group was asked to look over proposed goals and select the one they felt was most important.Examples included :to promote economical growth through the creation of new jobs,become a model for small town renewal,enhance the city's identity, etc.There was also a blank card to make other suggestions.
This required discussion among those present and negotiation.Then each team was asked to select five objectives that would best equip the community in reaching their goal which included suggestions like create career opportunities for young adults, increase curb appeal, capitalize on the nearby interstate, etc.
The next step was to identify ten methods toward reaching their objectives. Examples included: adding a truck stop, encouraging the development of industrial park, provide pedestrian walkways and bike paths, road improvements, a historic museum, community center, etc.
For over an hour, groups discussed and worked on their vision proposals determining a primary goal, objectives and methods which according to Garrott will enable the students to gain insight into the community's values and priorities.
The students will then take what they have learned and develop a proposed vision for Rich Hill complete with objectives and step by step methods. Those proposals will be presented at the next public meeting to be held April 5. at that meeting the students will again seek feedback from the community, taking what they learn with them to finalize their vision proposal.
In the upcoming weeks, the Mining Review will present the goals of each of the four groups that participated, including the objectives and methods which where proposed. Two of the four groups had identical goal; tho had other directions in mind and all varied in their objectives and methods.
In an effort to communicate to the public and encourage participation, the Review will interview those involved in tuesday's meeting and get their perspectives and vision for Rich Hill's future.
Posted by Bart McClaughry at 5:35 PM 1 comment:

Drury University students visit to Rich Hill (Rich Hill Mining Review)(Jan.28 2011)
Vision Team Chairperson Bart McClaughry traveled to Springfield, to give a power-point presentation to the students of the Drury School of Architecture, Wednesday, Jan.19 as a preliminary step in the Vision Initiative Program.
According to McClaughry, about 40 to 50 students listened to the presentation which highlighted both Rich Hill's history and the Vision Committee's concerns for the future. Other towns were also present that day giving presentations, but according to McClaughry, only rich Hill providied a power-point presentation.
"I felt like it went very well," said McClaughry who also stated that Professor Jay Garrott, the Vision Program director, related later that he had received positive feedback from many students regarding Rich Hill.
The next step in the process is the selection of those students who will be working on the Rich Hill initiative. Those hand picked students will then visit Rich Hill, Saturday, Jan. 29, when they will meet with the Vision Team Committee members and be given a tour of the community.
Natalea Hoeper, a member of the Vision Team Committee, who helped put the power-point presentation together, will be part of the group that hosts the students.
"I am looking forward to their visit," said Hoeper who also expressed interest in the work they will be doing.
"I've seen the kind of work they've done for other communities,"said Hoeper who mentioned two-inch thick books the students put together complete with studies, drawings, graphs, and forecasts.
Hoeper also expressed some of the concerns that the committees members have set before the students which include: curb appeal, a new community center, better roads and more jobs.
Posted by Bart McClaughry at 7:18 PM No comments: 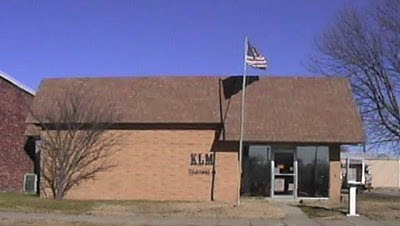 In January of 1955, Ken Kern, a teacher at the Finley Engineering College in Kansas City, was looking for a business to invest in. That business turned out to be the Rich Hill Telephone Company which had been owned by Mr. & Mrs. A L Shopper since 1941. Mr.

Kern asked a student at the college if he would be interested in going into partnership with him on this venture. That student was Raleigh Masur. A third partner, Mr. James Lamble, would also join them. Thus the name KLM was formed from the initials of their last names. Bill Turner of Pleasant Hill continued as manager of the Rich Hill exchange for a period of time.

In 1956 a small mutual company at Papinville was acquired from Mr. Clyde Rapp. The Rapps had operated the switchboard from their home and continued to do so until the area was converted to dial service in 1961. A complete renovation of the system was started in 1958 and would also be completed in 1961. By this time the company had outgrew the original office at 111 S 6th St and construction was started on the present building at 616 E Park.

Mr. Lamble resigned from the company in 1957. In 1959, the corporation bought the Metz and Richards exchanges from Mr. Charles R Spicer. The Spicers had owned the exchanges since 1938. Metz and Richards were converted to dial service in 1963. The KLM Corporation operated these exchanges as a separate partnership called the Missouri Union Telephone Company.

Mr. Kern continued to teach until 1962, when he moved to Rich Hill and assumed the day to day management of the company. Raleigh Masur sold his shares in the corporation and partnership to Kenneth Kern on January 25, 1965.

The Deerfield area near Richards was still a mutual exchange in 1971 with magneto service. Some customers petitioned the Missouri Public Service Commission for Bell service because they wanted dial. Mr. Kern made arrangements to rent some Stromberg equipment and by plowing cable “all winter”, the Deerfield area was converted to dial in six months (early 1972). That marked the end of crank telephones and the oh so familiar “Number Please”. Missouri Union Telephone Company was merged in to the KLM Telephone Company in 1973.

On December 21, 1987 all four exchanges were converted to digital. KLM could now offer services we had only heard about on TV. Call waiting and touch tone would prove to be the most popular.

Ken Kern died on February 10, 1990. His widow Cathy continued to operate the company until selling to the RBJ Corporation on December 23, 1992. This family oriented business is made up of the Copsey family with Evan and wife Jane having the honorable positions of President and Vice President. RBJ stands for Reese, Bruce and Jennifer with Reese taking the role of outside plant manager, and Bruce overseeing the office management.

In 1999 the offices would again be upgraded with new central office equipment. This would allow you to choose your long distance company. By the end of 1999 internet service would also be offered to allow local access to our customers.

In November 2007 the company would be purchased by American Broadband with Reese and Bruce staying on as local managers.

Late October of 2008 the central office and remotes were upgraded with new switching equipment.

Posted by Bart McClaughry at 7:34 AM No comments: 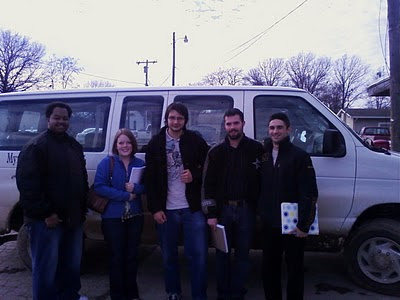 Drury Students that will be studying Rich Hill this Semester are,left to right: John Williams, Melissa Petrie, Mike Czajka, Robert Snyder and Justin Rios.
Drury University students visit Rich Hill (Rich Hill Mining Review) February 4, 2011
Five Students from the Drury School of Architecture were met by Rich Hill Vision Committee members Bart McClaughry, Natalea Hoeper, Jennifer Perkey Ewing, Randy Bell, Debbie Bradley, and Peggy Entrikin at Swopes Drive Inn at 11 am. on Saturday,Jan.29.
Following introductions, the students loaded up in the Myrtle Tree Christian Church Van and were given a tour of Rich Hill and the surrounding area by Natalea Hoeper. They visted Harmony Mission, a number of strip mine pits,the McGennis Youth Center,the Mennonite Community and Rich Hill itself arriving back at Swopes at 1:30 P.M.to enjoy a late lunch with committee members.
They really ebjoyed the Town, said McClaughry,"they especially loved our parks".
McClaughry also add that they were thrilled seeing Mennonites driving horse drawn buggies.
Their excitement according to McClaughry was partially due to the fact that most of the students were from urban areas like St. Louis and Chicago.
Following their tour of Rich Hill, the students traveled to Butler to visit the Bates County Museum to gain further insight on the history of the community.
"You could see their wheels already turning,"said Hoeper speaking of their interest in the community and their desire to find ways to enhance Rich Hill growth in the future.
"They've got their work cut for them,"said McClaughry ,"but we're all excited about the project".
According to McClaughry, the committee will probably meet a couple times in the upcoming weeks, but what he is excited about is the open public meeting Feb. 22
"It's an opportunity for others to get involved,"said McClaughry,"and we want to encourage anyone who would like to help to attend".
It's a sentiment that Hoeper also expressed.
"We need all the input we can get,"said Hoeper,"that's why we're doing a public meeting".
The Vision Initiative is intended to help citizens visualize what the town can become in the next 20 years. It's not a comprehensive plan, but a vision building program that combines community input with architectural talent.
Posted by Bart McClaughry at 1:04 AM No comments: