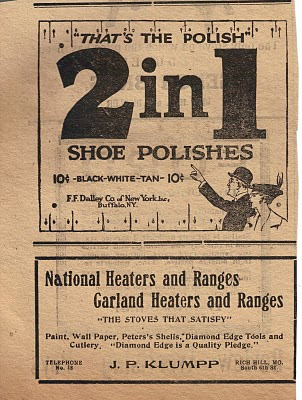 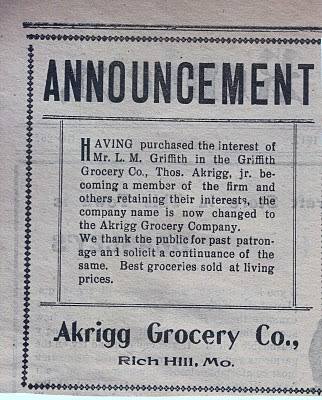 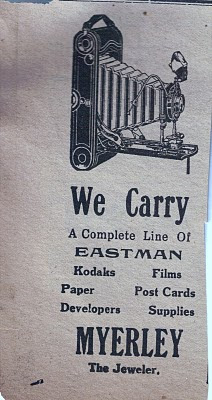 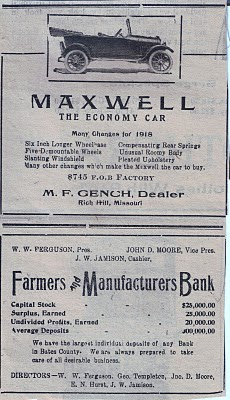 Posted by Bart McClaughry at 7:21 PM No comments:

This Blog is from the Rich Hill Mining Review Sept. 4 ,2009. This story is about the Rich Hill History blog and my connection to it. 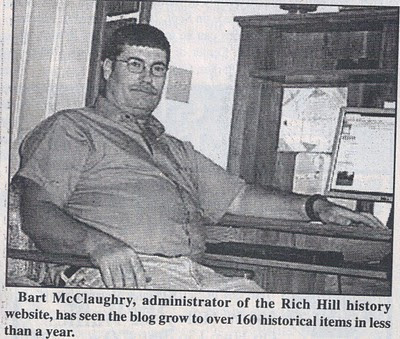 On the World Wide Web, more and more people are learning about the unique history of Rich Hill, "TheTown that coal built;" and it's because of Rich Hill electrician, Bart McClaughry.
A bit of a history buff, McClaughry first became inter­ested in Rich Hill's past as he and fellow city employees discussed some of the oddities of the town. For example, City Hall used to be a two story structure, but now its only one story. Why? Was there a fire? No one really knew. And the power station; it looks like two buildings joined together. Was it originally one building or was there a second building attached as the city grew? And of course, as an electrician, any insight into the history of the city's power grid perked McClaughry's interest.
Then one day, a person gave McClaughry a stack of old Mining Review newspapers. They were archive copies that had been the property of the Review but were being discard when discovered in one of the old buildings in town. They were so brittle, that even when carefully handled, the corners and edges broke off as the pages were turned. But inside were glimpses of a time when Rich Hill was a different place.
"I've always wondered about things;" said McClaughry, "but my interest in history probably started a number of years ago when I began researching my an­cestors." McClaughry had a close relationship with his grandpar­ents, but he realized he knew nothing about their parents.
I wanted to know to know about my grandparent's grandparents,"said McClaughry. Some folks just have an inquiring mind; that's why when the stack of old Rich Hill papers was dumped in McClaughry's lap his wheels began to turn.
As he searched through the papers, he began to tinker with the idea of starting a history web site. He was familiar with blog sites, having participated in one that was used by baseball card collectors, and realized a Rich Hill site wouldn't be too difficult to start. So he began scanning some of the articles and posting them. Then he made trips to the Butler Library and cop­ied articles from their micro-film records, and started taking advan­tage of the material at the Rich Hill library. Then others joined in. Some would give him photos with bits of information. And the site grew, more folks became aware of it.
Today, if you type Rich Hill history," in a Google search, you'll find the web site listed at the top www.richhillhistory.blogspot.com
"It's a great site for people to find out information about families," added McClaughry. "We have directories which list residents in the community in 1883 and in 1888." There is also a growing list of names from the Greenlawn Cemetery; currently 708 are listed, but it's a large project and one that will take time and help from others as there are approximately 8,000 markers to record.
"Its important to keep the site well documented," he adds, "which is why I rely on newspaper clippings and other previously recorded accounts."
Proper documentation is vital when individuals are doing family history or when historians want to know something about Rich Hill. But it's something that people can use just to learn about the town.
I had one resident's father-in-law contact me who said he re­ally appreciated the site because
he had always heard so much about Rich Hill, but now he had a resource for information," added McClaughry.
Rich Hill has had a number of individuals over the years that have helped preserve the town's history. There J .D. Moore, one of the city's founders, who was a great source in the early days, as was Frank Ralston, E.W. McQuitty did a lot to preserve the city's history with his contributions to the Review during the town's 75th anniversary. Then then there was Mary Griffin, who contributed to the Wagon Wheel section of the mining Review, and of course Randy Bell's book "The Town that Coal built,"which is the most authoritative work published.
McClaughry is quick to men­tion those who have contributed in the past, as well as those who have helped him with the current history web site.
"I really want to thank every­one who has helped me with the project," said McClaugry who mentioned a number of individu­als, but asked that their names not be listed as he didn't want to for­get someone, because as he put it, "they've all been very helpful." When most people think of his­tory, they think of classes in school or of that famous quote, "Those who forget history are doomed to repeat it." But to oth­ers, it's a way to connect with the past and an opportunity to learn. For those who enjoy history, or who are interested in Rich Hill, the place to visit is www.richhilMstroy.blogspot.com. And for those who want to get involved, simply contact McClaughry at bartm@ckt.net
Posted by Bart McClaughry at 4:36 PM 1 comment:

Part 2 on the Auditorium-gymnasium

This picture is out of the 1938 Year Book,the top picture is the school in 1888
The bottom picture is in 1938 after the new Auditorium was build 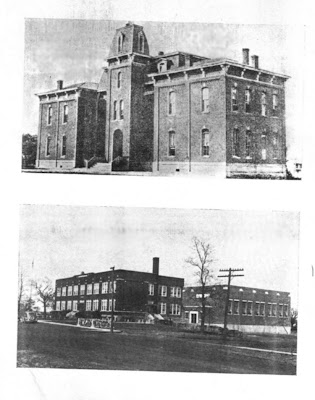 Posted by Bart McClaughry at 9:09 AM No comments:

This Blog comes from the 1938 yearbook 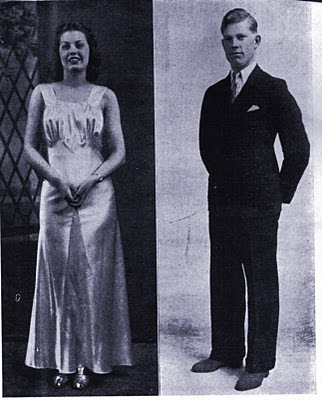 On March 18, 1938 the opening night of our new auditorium- gymnasium, the contest was completed that told which of our students was completed that told which of our students were to be King and Queen of the yearbook.
For a week the contest had raged. Every student had his favorites and was anxious to see them win. Two Seniors, Mary Vodry and Thelma Ochsner, and one Junior, Ruby Schapeler, were nominees for Queen; Herbert McDaniel, Earle Isaacson and Arthur Lynch were candidates for King.
At the close of the contest when the winners were announced to be Thelma Ochsner and Earla Isaacson, the study body cheered. While the orchestra played a triumphal march, the audience formed a lane through which they ascended the steps to their thrones. When Thelma and Earle were seated, the students sang with the orchestra.
The freshmen were the happiest students present for they felt triumphant over the victory of
Ikie, their football hero. Thelma's supporters beamed as she merrily danced the last number wearing on her dark curls the little crown of pink rosebuds.
That evening proved a happy one for all the students. It was a truly gala occasion.
Posted by Bart McClaughry at 11:00 AM No comments:

This Blog comes from the Rich Hill Mining Review on March 5, 2010 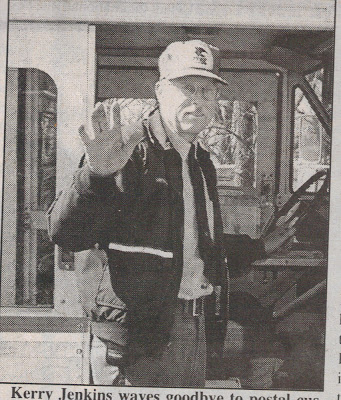 United States postal carrier Kerry Jenkins has been a familiar face in Rich Hill for over 17 years. Jenkins, who previously delivered mail in Butler, is once again returning to Butler after nearly two decades in Rich Hill because of changes in postal operations in Bates County. Friday, Feb. 26 was his last day delivering mail in Rich Hill, something he has done since Oct. 1992. The Min­ing Review caught up with him while he was on his route. "I'm going to miss working in Rich Hill," Jenkins said, "There are a lot of good people here."
Jenkins who lives in Adrian, has been making the drive to Rich Hill and delivering mail so long that he has seen children grow into adults. In fact, the class of 2010 was in diapers when he first started delivering.
"It's kind of like family," said Jenkins referring to the relationships he has developed over the years. Butler will be a closer drive for him, but according to Jenkins "I'd rather work in Rich Hill."
He then mentions how the saddest part is that he won't have an excuse to drive down to Rich Hill. When asked if he will'visit from time to time, especially during the Fourth of July celebration, he re­plied, "Yes, but it won't be the same."
Posted by Bart McClaughry at 6:36 PM No comments: