I want to thank Dennis Meyers for this  postcard scan 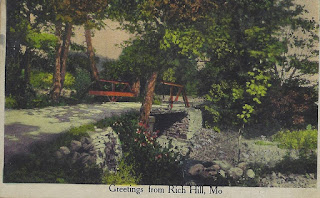 Dennis ask me if I  knew where the bridge over the creek is or was!
Dennis I am sorry I don't where this is or was.
Posted by Bart McClaughry at 5:35 AM No comments: 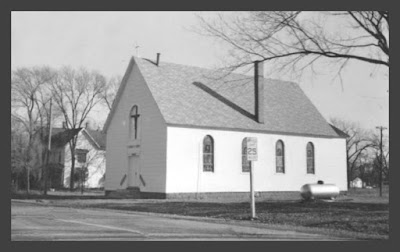 The Catholic church was organized in Rich Hill soon after the founding of the city.In the summer of 1880 a Catholic priest, a missionary to this district,came to Rich Hill at intervals and held mass and baptised babies.
At first he held mass in the home of Mr. and Mrs.Humphrey Connelly .Later mass was held in store building
Early in the year 1881, the congregation decided to build a church and in a few months the church was completed.The church was the same building  which stands on the corner of Ninth and Walnut streets During the years the church has been enlarged and services have been held continuously in all those years.
Two of the priests were father Daugherty and Father Fogarty.
Father John Murphy is pastor of the Church at this time.
Posted by Bart McClaughry at 6:51 PM No comments:

When Coal was King     June 20 2008 Mining Review
Part 1 by Jerry Pfeifer
Rich Hill was one of the fastest growing communities in Missouri history. It went from open prairie in 1880 to a thriving city of nearly 2,000 people in just three years. It was a bon-a-fide boom town, and in the next 20 years it continued to grow at a phenomenal pace. By the turn of the century with a population of about 6,000, Rich Hill was the centerpiece of Bates County. In this series “When Coal Was King,” we will examine this metropolitan upstart.

What caused its sudden growth, and how did it handle the challenges it faced? What was it like to walk the streets of Rich Hill on a Friday night or stroll through town on a Saturday afternoon? What kind of businesses sprang up in the community? In just three years, 784 houses were built and over 200 new businesses established. Did people become accustomed to the constant buzz of saws and pounding of hammers?

Ed McQuitty knew what Rich Hill was like. He moved there with his family when he was five and grew up in the area. His parents like many farmers who suffered through the Post-Civil War Era, lost their farm and came to Rich Hill looking for a new start. In an article written by McQuitty, he relates his personal memories of that move and of his families early days in Rich Hill.

"At day-break on a bitter cold day Jan. 2, 1880, the family, huddled in an unheated 'prairie schooner' headed east toward our new home. Tears came to the eyes of both father and mother as they cast a backward glance toward the old farm, settled by homestead. Years before the outbreak of the Civil War.”

Through a blanket of white covering the ground and at a creeping pace, it proved a monotonous journey except when our attention was diverted from aching fingers, tingling toes and red noses by the droves of hungry coyotes, the flights of prairie chickens and pigeons in masses. Through a blinding snow and with horses floundering through half-frozen grass reaching to their withers, we held to an easterly course.

It was an act of providence that we landed, half-frozen, after a trek of some 30 miles. A skeleton of a house awaited us, having been built by an older brother who had gone on before. Although unfinished, the roughened walls and sturdy roof afforded real comfort compared to the below zero temperatures we had endured for the past 15 hours. When thawed out, the family in unison heralded, "So this is Rich Hill."

The McQuitty's had arrived in Rich Hill, and they were some of the earliest, but it didn't take long before a constant stream of newcomers began to flow into town.  People of all nationalities moved to Rich Hill, and they came with knapsack filled with food and with bedding and blankets strapped on their shoulders.

The McQuitty family sensing the situation got the necessary furnishings together and opened the 'Home Hotel' to as many of the wayfarers as they could.
E. R. McQuitty writes: "The place was well named, and mother as she was known to all the borders, was an old fashioned farm cook and no one was allowed to leave her table hungry. Great pots of steaming coffee, plates piled high with hot biscuits, huge platters of fried chicken with milk gravy, brown baked potatoes, etc. were set before her guests and, with a smile all were bid 'help yourselves' and when finished 'please hand to Dad, on the way out, the generous sum of 25-cents.' And business boomed."

Rich Hill grew extraordinarily fast over the next few years and there were a number of reasons why. First, there were rich beds of coal in the area and coal was in demand. It was needed by the railroads, needed by industry and needed more and more by households as a source of heat.  The early pioneers in the area knew about the coal in Rich Hill, but they had no idea how much lay beneath them. When the mining companies caught wind of the size of the beds and deep veins, the rush to set up mining began.

But rail lines were needed to move the coal and there were no tracks in the county. Butler and all the towns in the county had been overlooked by the railroads, but now with the mining interests, the Missouri Pacific Railroad and the Gulf Railway built two separate rail lines to the Rich Hill area.

Another major reason for the boom in Rich Hill was because of the depression that was occurring throughout the United States. When a major component of the country's banking establishment went bankrupt in 1873, a chain reaction occurred. The New York Stock Exchange closed for l0 days, one fourth of all the railroads went bankrupt, and factories began to lay off workers, by 1876 unemployment had risen to l4-percent. Farmers had lost farms, people had lost their jobs and when news of Rich Hill spread, people began arriving.

Most were like the McQuitty’s  coming for a new start, but there were others; the riffraff, the follow-uppers, the bums, the gamblers, and the get rich gentry, as well as numerous girls and women who possessed everything other than a Sunday school reputation. Rich Hill was becoming a boom town in every way and in the next issue we will look at how it began to handle its sudden growth. 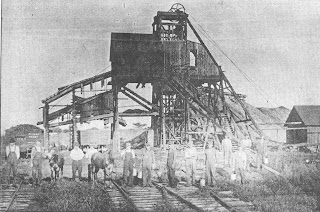 Workmen along with mules pose in front of one of rich hill's early deep mines shafts.Coal mining brought enormous growth to the area beginning in the mid 1880s.The mining operation attracted thousands to the area and caused Rich Hill and surrounding communities to boom.
Posted by Bart McClaughry at 7:44 PM No comments: 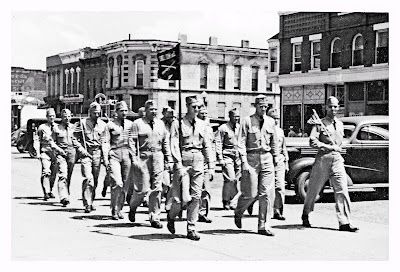 Back of picture says 6/14/1943-Myerley's Camera Counter Rich Hill Mo.
Posted by Bart McClaughry at 9:53 AM No comments:

I would like to thank Frank Droz for giving me these photos from his sister  Francine Droz collection.
Picture 3. says 1948 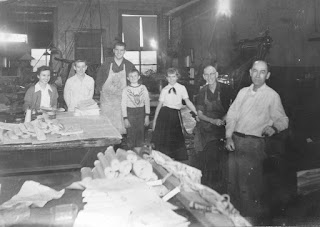 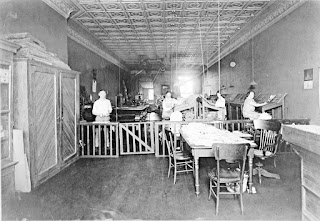 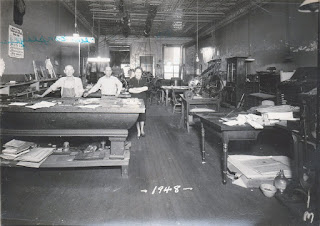 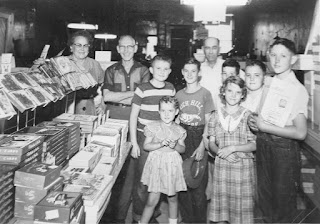 Posted by Bart McClaughry at 3:52 AM No comments: