When Rich Hill was being settled twenty years after the Civil War, settlers from both the Union and the Con federate armies moved into this city. Veterans who had fought under the stars and stripes soon became acquainted with one another. Before long they decided to meet and draw up a petition for a GAR post here in Rich Hill.
It was not long until the charter came through from the Department of Missouri, St. Louis, stipulating that the local organization would be known as General Canby Post No. 10 of the Department of Missouri, Grand Army of the Republic. Many of the people who were charter members were pioneers in the settlement of Rich Hill and continued to live here the rest of their lives.
These veterans knew that the organization had first been formed in 1865-66 in Illinois by Major Benjamin F. Stephenson, surgeon and Rev. J. Rutledge, Chaplin both of the 14th Infantry. This organization was so popular that within the next twenty years that membership reached more than half a million.
Each year the GAR held an annual encampment in different cities of the north. In 1883 the GAR held their encampment in Baltimore, Maryland. It was there that the organization gained national recognition. In 1885 more than thirty thousand marched in their parade in Portland, Maine. But by 1930 only twenty-one thousand names remained on the roll.
In 1948 the Encampment was held at Grand Rapids, Michigan, with only five veterans marching in the parade. It was then that they decided that this would be the last Encampment and singing of "Tenting on the Old Camp Grounds" while this organization no longer exists, the memory still lingers among descendants of that war.
The Rich Hill directory of 1883 gave information on the General Canby Post No. 10 GAR. The meeting for organi zation was held at McElroy's Hall located on the east side of sixth street between Walnut and Park Avenue. The directory also lists the following as the First Official Family of the local organization of the G.A.R.: S. G. Higgins,. Post Commander; R. H. Dale, Senior Vice Commander; J. B. Williams, Junior Vice Commander; S. B. Cole, Quarter master; George B. Huckeby, Adjutant; D.W.C. O'Neill, Chaplin; H. C. Jones, Officer of Guard; W. W. Wolfe, Officer of the Day; John W. Snider, Quarter master Sergeant; and John W. Scott, Sergeant Major.
Canby Post No. 10 GAR lasted more than forty years locally and it is estimated that more than 300 members had joined the local post. The last two members were A. B. Henderson and J.  I. Brooks.
I recall that Mr. J. I. Brooks always had some one to place flags on the graves of veterans for Memorial Day. 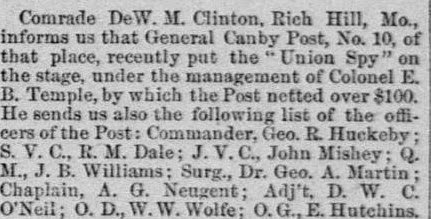 Posted by Bart McClaughry at 8:36 AM No comments:

High School commencement
The Rich Hill high School commencement exercises were eminently creditable to all engaged in them,from the invocation to the closing exercise.
"The Shadow Song"was rendered in Mrs. J.M Johanners best style which is only another way of saying it pleased everyone.
The salutatory ,"The path of glory in America," by Miss Mary Mattingly, was well delivered and well received by the audience.
Miss Blanch Edith Rhodes essay,"Self Made if Ever Made"was so true that everybody saw the point and it was a pleasing production.
"Life's Dream," rendered by the M.F.M. Quartet was an excellent piece of music sung in an excellent piece of music.Sung in an excellent manner by a club quartet that reflects credit upon the community in the excellent way in which they do things.
Miss Alta Matteson's Valedictory ,"Influence of Associates,"Was an elegant production by one of Rich Hill's best young ladies.
The Piano Solo by Prof. Kimbrough was delightful to lovers of music.
Rev.W.T. Pyles address was appropriate excellent and appreciated by the audience.The presentation of diplomas was then made by F.H. Chevertoo,President of the School Board.
The closing item on the program.In the hour of softening Splendor, was splendidly rendered by a quartet,misses Lutie Winchell, Gertrude Cheverton,Florence Slater and Maggie Hughed
Every went off smoothly and to the satisfaction of all under the splendid management of Prof S.M. Barret and his associates.

Posted by Bart McClaughry at 9:01 PM No comments: 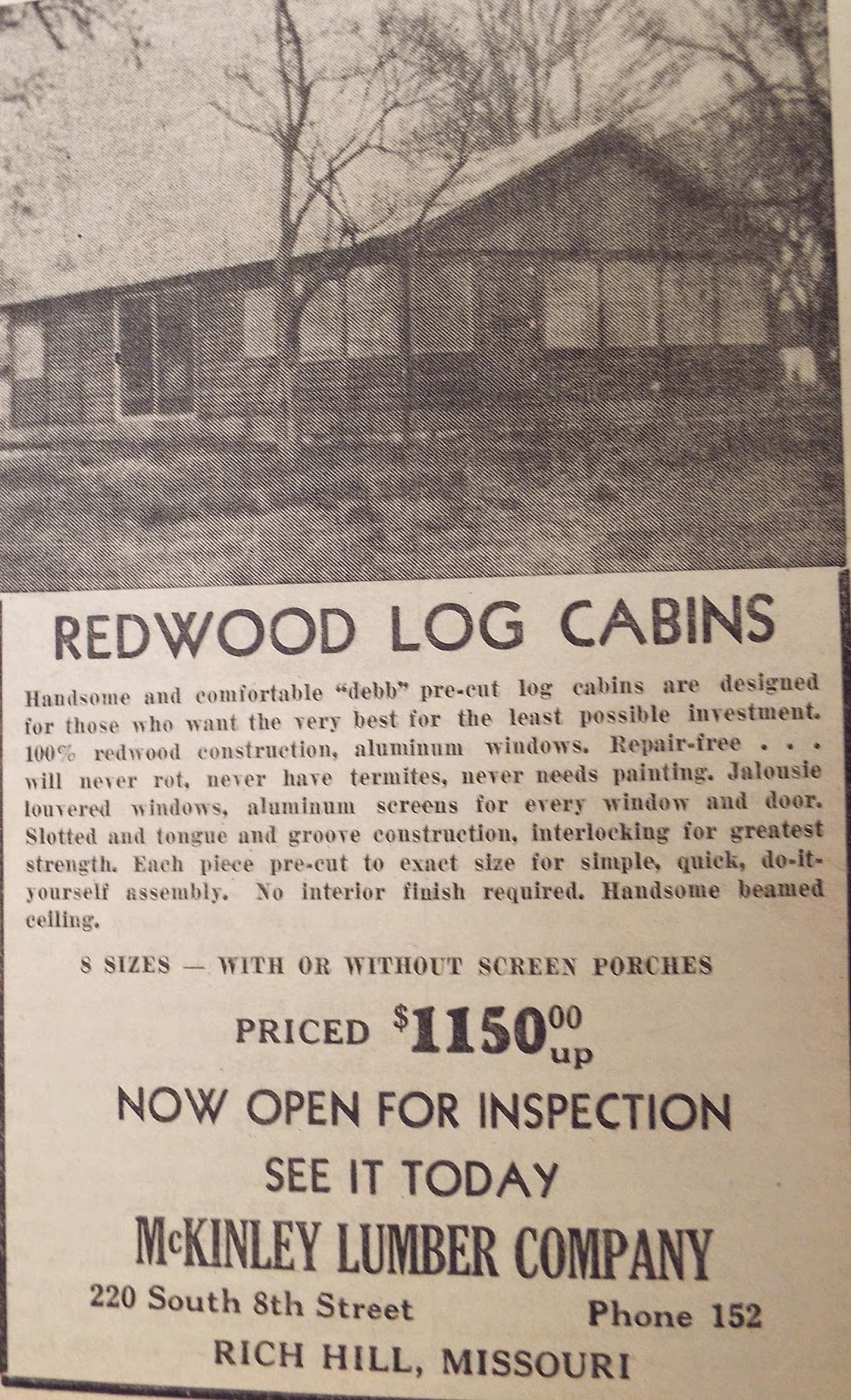 Posted by Bart McClaughry at 12:02 PM No comments: 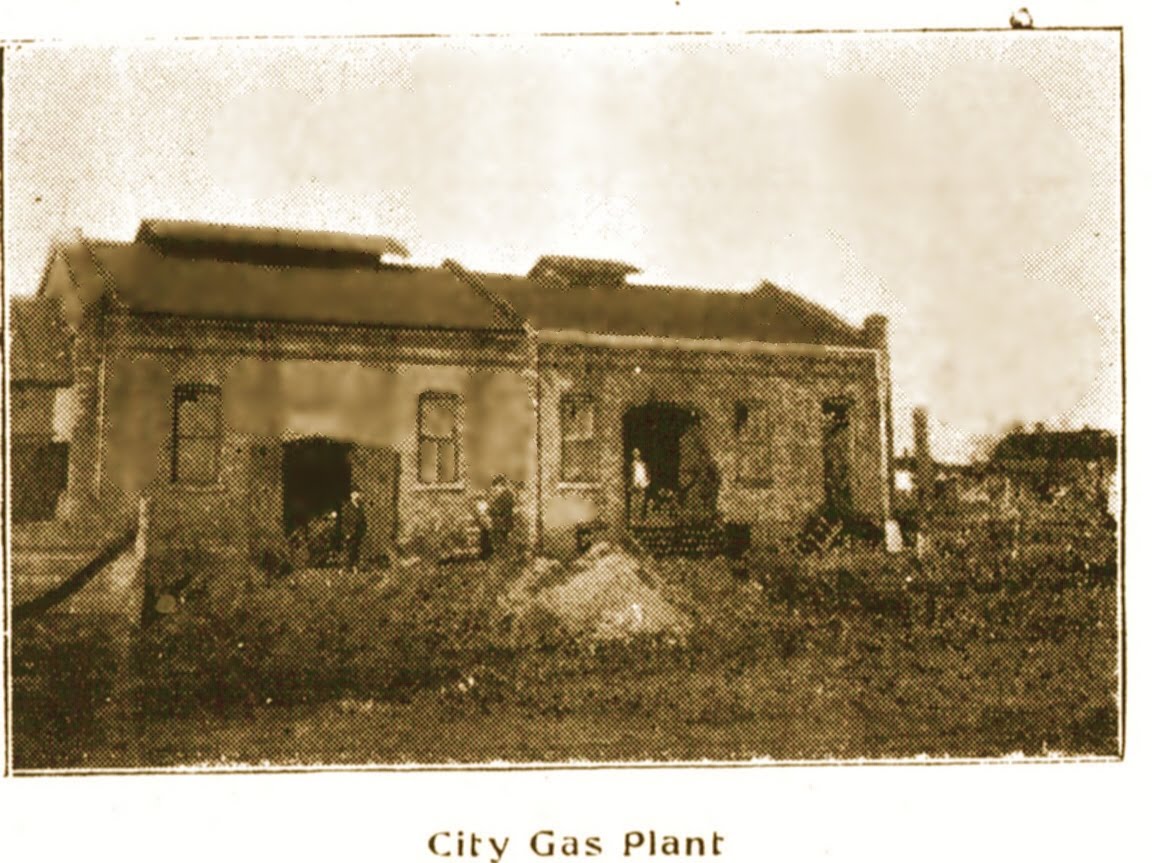 The development and utilization of natural gas had been made a success, temporarily, at least, at Ft. Scott, and Colonel Irish conceived the idea of prospecting for natural gas in the interest of Rich Hill as it was known to exist in many of the deeper wells in Howard and New Home townships and had been troublesome in the entries in the different mining shafts west of the city; and he set about to secure a franchise for furnishing Rich Hill with natural gas and ultimately secured a very liberal franchise, with the privilege of putting in an artificial gas plant; and failed to find, after prospecting, a sufficient amount and requisite pressure of the natural gas to be successfully utilized. He did the prospecting west of the city and penetrated the gas strata but the pressure was not sufficiently strong to be of use for the. purposes required. Thereupon he installed an artificial gas plant, costing thirty thousand dollars and operated the same for several years, purchasing in the meantime the electric light plant. A few years later when on a business trip to St. Louis he met the Garrisons and learned they desired to sell their water plant at Rich Hill and figuring out that the three plants could be operated together to advantage and with economy, he negotiated for the purchase of the water works plant at a cost of seventy five thousand dollars, and consolidated the three companies under the name of the Rich Hills Water, Light and Fuel Company and as president and general manager of the company, operated them successfully for three or four years when he had a vision of Rich Hill's decline and sold and transferred all but a few shares of the stock to a St. Louis syndicate of capitalists and resigned as president and general manager. Several years after this the city of Rich Hill acquired all the interests of the company. 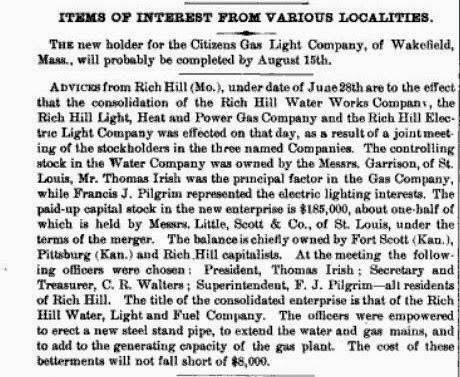