50 years ago Sept. 16 1932
For the last 25 years the little Bates county town of Rich Hill has been denied an honor due it from the fact that the compilers of Who's Who on Broadway failed to double check the data on Ernest Truex, the "half pint" comedian, as Mr.Truex often refers to himself, who is know to theaters goers on two continents, has made famous a Missouri town which never existed."Red Hill" has received the honor of being the birthplace of Mr.Truex and only recently a prominent New  York columnist referred to Mr. Truex as the "Red Hill Missouri boy who made good in the city."
With years of such misinformation going out to the reading public,Rich Hill citizens finally "got mad."They took the matter up with Ernest with the result that Rich Hill will replace "Red Hill" as the birthplace and the early  home of Mr. Truex with the next appearance of Who's Who on Broadway.In an interveiw with Mr. Truex he said"There is no such town in Missouri as Red Hill,but I never denied it when writers gave that mythical town the honor,and for years that town has appeared as my birthplace."
In 1896 a stranded Shakespearean actor became ill. Ernest's father,Dr.J.L.Truex,then practicing in Rich Hill,now in Joplin,treated the actor-Edward M. Chamberlain.Unable to meet the bill after his recovery, Mr. Chamberlain organized a school of elocution and dramatics and agreed to pay the doctor's bill by giving five-year old Ernest lessons in the art of stage.The results was that Ernest made his debut a few months later on the stage of the opera house here in Nevada,playing the part of Hamlet.For some years he was billed as a child prodigy and appeared in many cities in Shakespeare's plays before landing on Broadway.
Rich Hill's older citizens, who knew Ernest as a boy and watched his rise to stardom in the theater world,had as their only regret for years the error consistently made as to Mr.Truex's birthplace.Now that Ernest has corrected this error everyone is again happy in the old home town and when he is next billed for an appearance in Kansas City,all his old friends from this little city will be there to greet him in a big way. 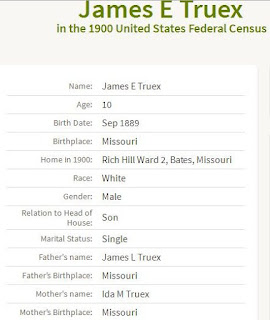 Posted by Bart McClaughry at 10:52 AM No comments: 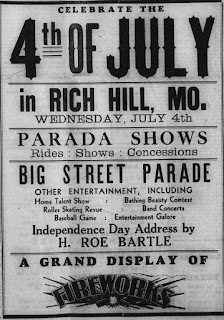 The fourth of July committees have been working hard the past week completing plans for the Fourth of July celebration here.Arrangements are nearly completed and according to the information received a finer program is in store for those attending the celebration than has been presented here in many years.
The celebration this year will observe the 175th Anniversary of the founding of the United States. All churches in Rich Hill are asked to ring their church bells for five minutes at twelve noon on July 4 to acknowledge this anniversary.Upon hearing the tolling of the bells,all persons are asked to pause and offer silent prayer of thanks to God for the Freedom and Principles which this nation was founded.
The Parada Shows will arrive in Rich Hill Monday and be here for the Fourth.This show has been in Rich Hill several times in previous years and they have a nice clean show.They have a number of rides,shows and concessions.
Rich Hill has two fine parks in which the people who arrive for the day can find plenty of shade. The East Park is the picnic park. There one will find ovens and tables for their picnic dinners.Central Park, which is downtown, has many seats for the comfort of those attending and the programs in the afternoon and evening will be held in the bandstand this Park.

There has been no special entertainment planned for the morning but  the Parada shows will open early for the entertainment of those coming to town in the morning
In the afternoon a street parade will be held at 2 o'clock. Prizes are being offered for the best decorated floats as follows :first prize,$25.00: second prize $15.00:and third prize $10.00.An added feature to the parade this year will be the boys and girls riding ponies.Prizes will also be given, for the best dressed boy or girl on horse or pony,first prize,$10.00 :second  prize $5.00, and thrid prize $2.50.There are many ways in witch they may dress, such as Indians,Mexicans or cowboys and cowgirls.
Anyone who wants to participate in the parade contact Sam Fisher of or Shirley Booth.Charles Logan of Nevada has notified Mr. Booth that he will be again this year with his Shetland ponies, which are favorites of the children.

Immediately following the parade Mr.H. Roe Bartle,of Kansas City will give the Independence Day address Mr. Bartle has been a leader in Boy Scout work in Kansas City and this region for many years.He has served as President of Missouri Valley College at Marshall Mo. and at the present time is regional director of the office of Price Stabilization.
L.G.Nelson of the Nelson Construction company is sponsoring a turtle race which is open to all children between the ages of 6 and 19 years.Any child wanting to participate in this event is asked to contact Mr. Nelson.
Edward Wright of the Rich Hill Roller Rink is sponsoring a roller skating 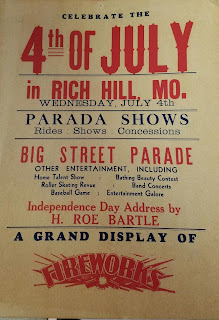 contest on Park Avenue between sixth and Seventh streets. we have no particulars concerning this event but are sure Mr. Wright has some extra special entertainment in this feature for all.
The Rich Hill Legionnaires baseball team will play at Association Park following the parade for the baseball fans of this community.
The Rich Hill High School band will give a short concert in the evening preceding the dinner hour. The entertainment for the evening will begin at 7 O'clock when we have something new in the entertainment field, and that is the "baby buggy parade." Prizes will be awarded for the best decorated baby buggy or stroller, in the following amounts:  first prize $10.00:  second prize $5.00: and third prize $2.50.  Prizes will be awarded on the appearance of the whole unit but with the greatest emphasis being on the decoration of the vehicle. Those who desire to compete in this parade should contact Sam Fisher.
Immediately following the baby buggy parade a variety show of home talent will be held in the band stand in Central Park. This program is under the direction of Miss Zelma Copeland and it is at this time that all attending will have the privilege of seeing the many beautiful bathing beauties of our town.
Miss Copeland has many other interesting numbers planned for this program.
The fourth of July program will end at 10 o'clock with a grand display of fireworks on Park avenue near the railroad tracks.
Fourth of July celebrations are not new in Rich Hill. Rich Hill has celebrated yearly since 1881, except during World War I and World War II. the first celebration  was held on the block on the North side of Walnut Street, just east of the railroad track.  A hotel was located where the Paris Woodall home now stands. Heavy timbers were hauled in to make shelter tents because there were no trees at that time to provide shade.  Each year the committees try to make the celebration better than the preceding one and this year is no exception. These celebrations are really Rich Hill's annual homecoming days for people travel great distances to meet their friends here.