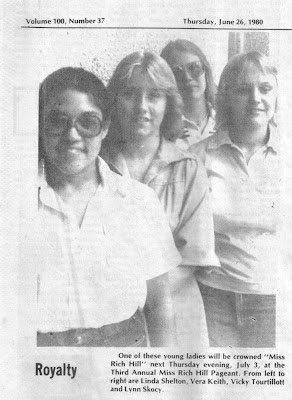 One of these young ladies will be crowed "Miss Rich Hill"next Thursday evening. July 3, at the Third Annual Miss Rich Hill Pageant.From Left to right are Linda Shelton,Vera Keith,Vicky Tourillott and Lynn Skocy.
Posted by Bart McClaughry at 8:06 PM No comments:

Picture says :This picture was sent by Ida Kenney.It is a picture of grades six and seven taken in the School year of 1913-1914.Charles C. Crosswhite was the Principal at the time. 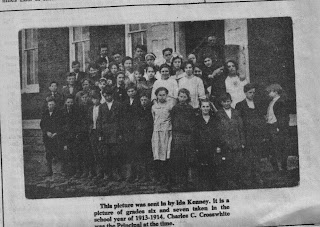 Posted by Bart McClaughry at 9:24 AM No comments:

In announcing the sale of the Booth Chapel, Theatre, business office and home to George and Therese Flexsenhar, Dorothy Booth makes an end to a long family history in Rich Hill.
From the first days of Rich Hill's development the Booths have played a major role. Rolla Jesse and Fannie Hedges were the first ,two school teachers. Fannie then married the surveying engineer, Charles Clark, who planned the layout of the streets. Rolla and her new husb.and started the old "Opry" House, a photography studio, furniture, store, livery stable and funeral parlor.
These early coal mining days saw Rich Hill population grow faster than Butler or Nevada. Weekends were spent riding around in a buggy seeing the tents and new buildings which had mushroomed up.;
Horse racing was popular. Many old timers remember when' Booth's Consillio held the world championship title for sulky racing.
H. M. & Rolla's children Beryl (Smalley), Harry, Frances (Boughan), Jimmie and Shirley all grew up in the large white house by the West park. Jimmie died in childhood from eating poison berries. Frances' death later resultd in Jim, Booth and Rolla Beryl Boughan being reared by Nanaw Booth. Virginia moved to Indiana with her aunt, Beryl.
Dorothy, Shirley and daughter, Peggy Ann, returned from St. Louis in 1936 when his parents health failed.
Later two modern theatres were built and the family home was trans­formed into a lovely, dignified Funeral Chapel. Shirley and Dorothy's Carth­age cut stone house is adjacent to the North.
Shirley served as President of the School Board when the athletic field and auditorium were constructed. Every 4th of July parade bulged with his floats from many organizations.
After his death, Dorothy carried on the family tradition for a decade of service for people at the time of the death of their loved ones.
"Leaving was a very difficult decision for me to make," said Mrs. Booth.
"George Flexsenhar is home-folks. He worked for us while going to high school. His experience includes many years of owning his own funeral home in Lebanon, Mo. Therese has already endeared herself to bereaved fam­ilies," said Mrs. Booth.
Mrs. Booth intends to travel exten­sively and eventually, make her home in St. Louis near her daughter. Peggy Ann Thompson is Executive Director of five St. Louis Hearing and Speech Centers. Her husband Corley (Jim-mie) is a Public Adjuster and a State Representative. Their daughter Terry Ann Bridgnole (25) is married and living in a St. Louis suburb. Jim (23] makes his home in San Diego, Califor nia. Ten year old Gregdry Booth wil be in the 5th grade this fall.
"A large part of my heart wil always remain with my dear friend; and neighbors in Rich Hill," coneluded Mrs. Booth.


Posted by Bart McClaughry at 6:17 AM No comments:

Posted by Bart McClaughry at 8:04 AM No comments: 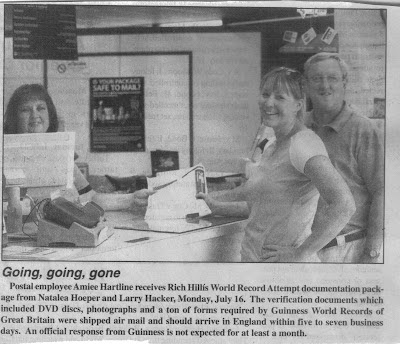 Going,Going,Gone
Postal Employee Amiee Hartline receives Rich Hill's World Record attempt documentation package from Natalea Hoeper and Larry Hacker,Monday,July 16. The verification documents which included DVD discs,photographs and a ton of forms required by Guinness World Records of Great Britain were shipped air mail and should arrive in England within five to seven business days. An official response from Guinness is not expected for at least a month.
Posted by Bart McClaughry at 3:29 PM No comments: 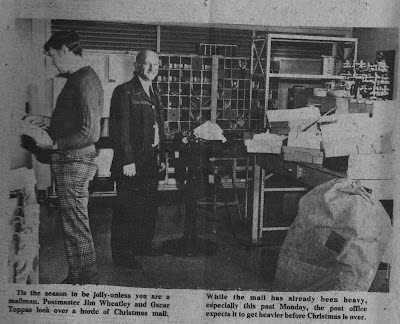 Posted by Bart McClaughry at 7:50 PM No comments:

This picture is from the July,19 ,1979 Rich Hill Mining Review (Belvins Collection)

Posted by Bart McClaughry at 8:09 PM No comments: 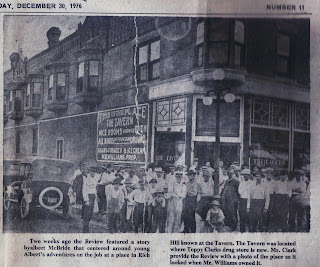 The Paper says
Two weeks ago the Review featured a story by Albert McBride that centered around young Albert's adventures on the job at a place in Rich Hill known at the Tavern.The Tavern was located where Toppy Clarks drug store is now.Mr. Clark provide the Review with a photo of the place as it looked when Mr. Williams owned it.
Posted by Bart McClaughry at 8:21 PM No comments:


Jerry Rigdon Security Bank of Rich Hill cut a ribbon of twenty dollar bills (he cut between the bills)for the Stagecoach Inn's open house.Rigdon is at the left of the picture and Jim and Jeanne Bain owners of the new cafe look on.
About 250 persons were on hand for the ribbon cutting and between 800 and 1000 attend the open house throughout Saturday afternoon .
The two-story structure features 3 dining rooms upstairs, a bus depot and a camping area behind the cafe.The entire cafe is done in a western decor. 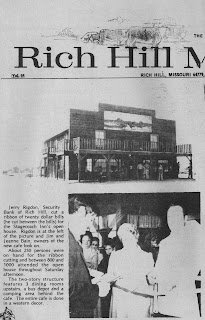 Posted by Bart McClaughry at 6:23 AM No comments:

The New Gym and Open House

More from the Belevins Newspaper Collection
January 12,1984 Mining Review
180 attend gym Open House
A crowd of 180 persons attend the open house and Dedication service for Rich Hill's new gymnasium this past Sunday.
School Board president Bill Perkey pointed out the painting a Cleat,the Tiger mascot,at center count which was painted by art instructor Bob Schlyer.
Perkey said he hoped that ,Cleat would also become a symbol of good sportsmanship at Rich Hill.
Perkey invited those in attendance to look the facility up work to be done.
The new gym saw game action for the first time Tuesday night as the Tigers hosted Walker. The junior high teams will play on the new court Thursday evening and the Rich Hill junior varsity and varsity teams will host Sheldon there Saturday night .
Perkey also told the crowd that the school board had authorized a Rich Hill Invitational Tournament for next season. 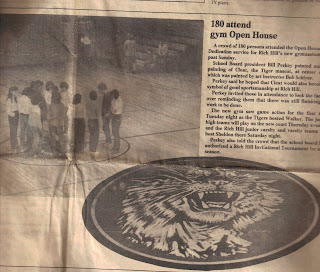 Posted by Bart McClaughry at 6:50 PM No comments:

Dale Blevins parents owned the Review from 1972 to 1980 and when recently moving his mother off the farm he found almost every issue of the Review from 1974 through 1980. He said I could have use of them
for awhile to post on the blog. The first story I am posting is about Ruth England. 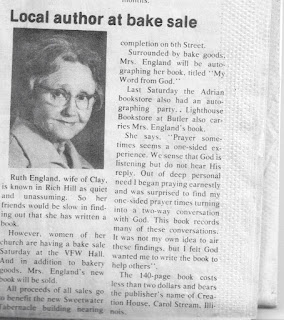 This story comes from the Oct 11 1979 Mining Review


Posted by Bart McClaughry at 7:59 PM No comments: 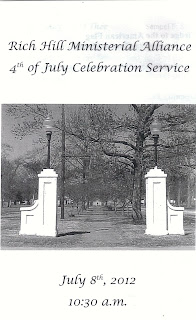 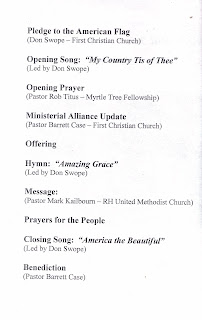 Posted by Bart McClaughry at 8:49 PM No comments: